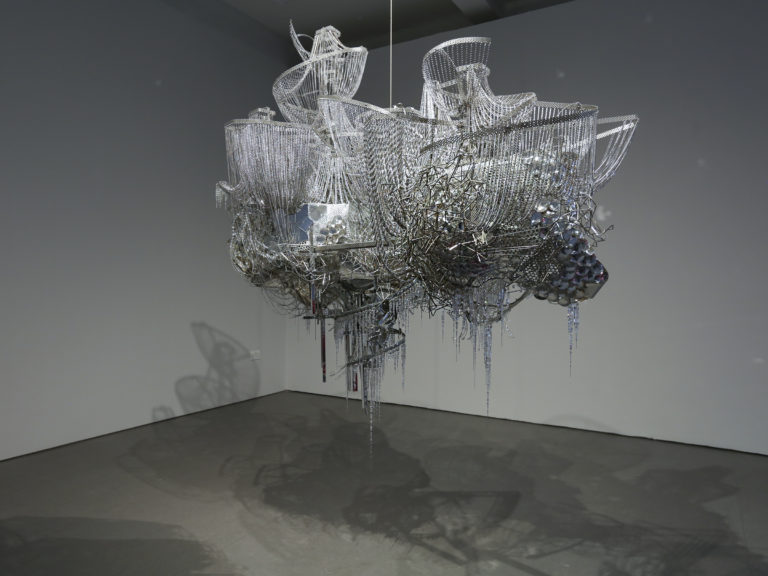 Lee Bul creates works that reflect her philosophical exploration of the 20th century cultural history. Exploring issues ranging from societal gender roles and the perceived failure of idealism to the relationship between humans and technology, she produces genre-crossing works rooted in critical theory, art history and themes from science fiction. Bul’s suspended sculptures are inspired by the futuristic spirit of prominent German architect Bruno Taut, who designed the Glass Pavilion, a prismatic glass dome structure, for the Cologne Werkbund Exhibition in 1914. In State of Reflection (2016) a dreamlike scene is constructed resembling a frozen landscape of floating mountains with winding roadways across a land studded with stalactite-like shapes. State of Reflection (2016) is inspired by Taut’s utopian visions of an ‘Alpine Architecture’, devised just before the end of the First World War and the collapse of the German empire. In an attempt to divert mankind’s energy away from war and conflict, Taut proposed the construction of dazzling cities in the Alps, made entirely of crystal and glass.

Lee Bul works across a diverse range of media – from drawing, sculpture, and painting to performance, installation, and video. Her work explores themes such as the utopian desire to achieve perfection through technological advances, and the dystopic effects and failures that are often the result. Recent solo exhibitions include: Art Sonje Center, Seoul (2016/12); Vancouver Art Gallery (2015); and Palais de Tokyo, Paris (2015). Her work has been in many group exhibitions and biennials such as: Score_Music for Everyone, Daegu Art Museum, Korea (2017); the 20th Biennale of Sydney (2016); Contemporary Art at the Guggenheim, Solomon R. Guggenheim Museum, New York (2015); among others. A survey exhibition of her work opens at The Hayward Gallery, London in Spring 2018 and will travel to Martin Gropius Bau, Berlin.