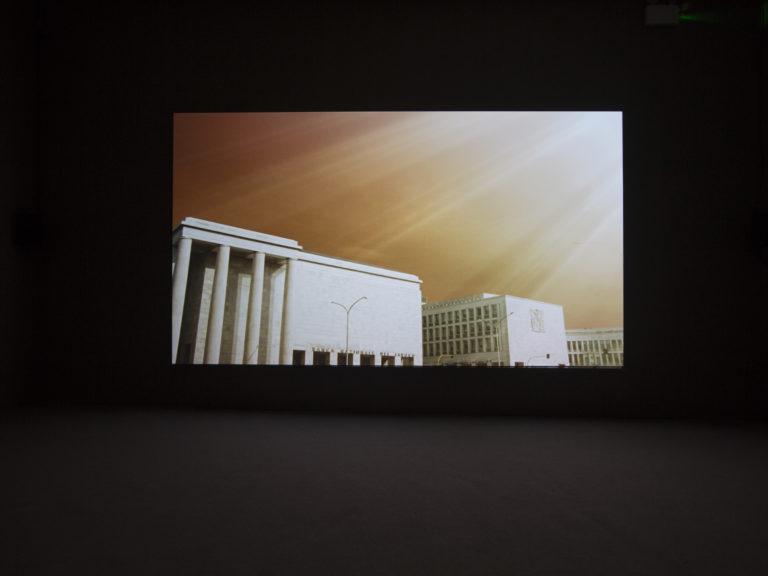 Grasso weaves together philosophical and mystical references to create a multidisciplinary practice that ranges from classically painted oil works on canvas to video. One of the main concepts found in his work is what is real is twofold. His work Soleil Double (2014) — an animation that shows the sunrise and sunset of two suns — was shot in Esposizione Universale Roma (EUR), a residential and business district in Rome built for the unrealised 1942 World’s Fair, which was intended to celebrate the twenty year anniversary of fascism and as a display of Mussolini’s power. In the film’s sequence showing the Palace of Italian Civilisation, two suns appear, referring to a theory that the sun has a twin — a nemesis. The scene is suggestive that some sort of natural disaster or phenomena is occurring. On a more symbolic level, Grasso’s work considers concepts of duplicity and ubiquity, and the idea that reality could be something other than what it appears to be. Shifting perceptions of reality and the investigation of known and unknown territory are common subjects throughout Grasso’s oeuvre.

Laurent Grasso explores sciences through electromagnetic energy, radio waves, and naturally occurring phenomena as they apply to paranormal activity. This was a favourite subject of eighteenth-century scientists and philosophers, often used as parlour entertainment during the Victorian era. Grasso was awarded the Marcel Duchamp Prize in 2008 and is the subject of a major monograph Laurent Grasso: The Black-Body Radiation,published by Les presses du réel. Recent solo exhibitions include: The Horn Perspective, Centre Pompidou; and Gakona, Palais de Tokyo, Paris (2009). Grasso was also included in 9th Sharjah Biennial and Manifesta 8.

Participation in EVA International supported by the Institut Français and the French Embassy in Ireland.