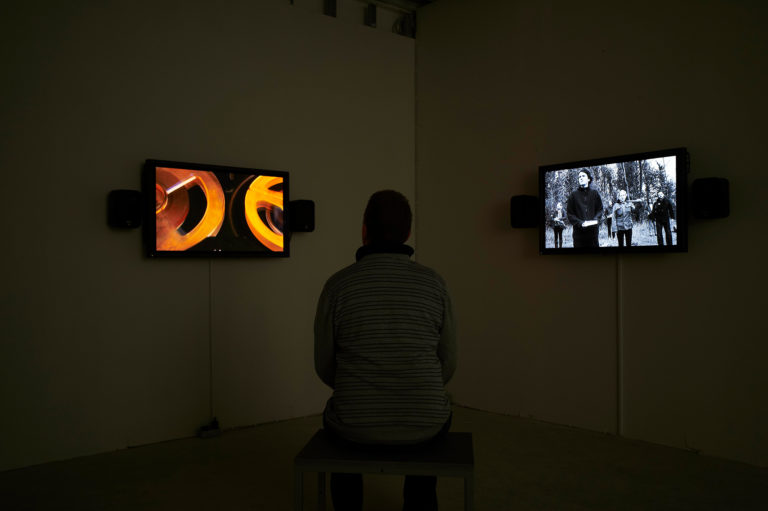 Working in moving image, Laura Smith’s recent work has developed around socio-political relationships. Through a combination of narrative, attention to site, documentary and staged actions, Smith’s vignettes consider the tensions between society and the political. Interweaving the personal with the political, Smith’s work explores feelings of uncertainty, displacement, powerlessness and exclusion.

‘The Alternative is…’ is a two-channel HD video which focuses on the establishment of the pirate radio station Radio City at Shivering Sands WWII anti-airfield forts on the Thames estuary. Pirate radio emerged alongside other anti-establishment organisations that erupted in the 1960s. This piece explores a moment when a section of society took control. In this case, Radio City took over its channels of information by radically refusing to operate within the legal boundaries that oppressed freedom of speech.

‘The Alternative is…’ compares a historical event to the current uncertainty brought about by the global economic crisis. The future looks bleak, socio-political relationships worldwide are under strain, decisions appear to be made not by society or politicians but by the non-human machine: the stock market.

The failure of capitalism has not improved this situation and society has been forced to deal with the impositions put in place to stabilise the market. These measures have evidently failed, yet no alternative solutions are being entertained. Smith’s work contemplates other possibilities by reflecting on the 1960s, an era renowned for spectacular protests that resulted in many changes throughout society.

The first part of the work focuses on a historical reconstruction of Radio City. Through a combination of interviews, on-site footage, archive materials and photographs it asks the viewer to consider the utopian possibilities of this removed society.

The second element is an artistic response to this history; it presents a gathering of people, each carrying an item as they separate themselves from the mainland to start their new society in search of new ways of being.

Laura Smith is an artist based in Dublin. Smith graduated in 2010 with a BA (Hon) Fine Art degree from DIT. Exhibitions include jockeyism at Block T, Dublin and Orchestral Osmosis, which resulted from a collaboration with UCD School of Architecture and DIT School of Music.