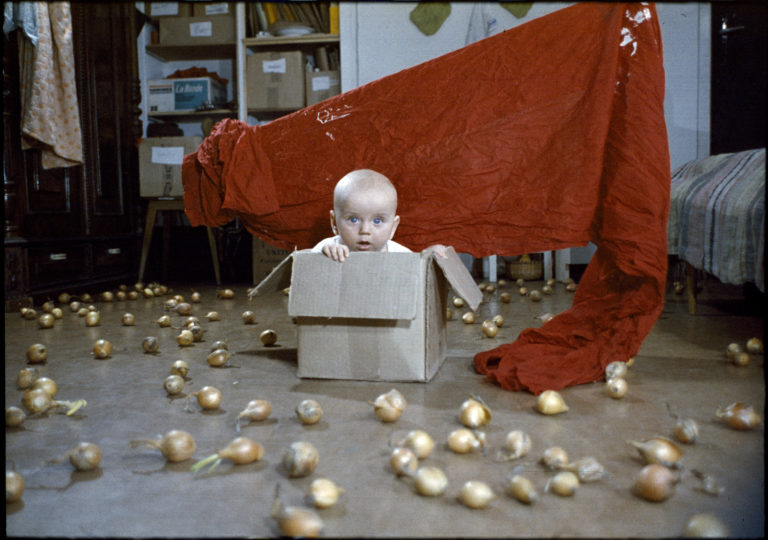 KwieKulik were prominent members of the Eastern European neo-avant-garde 1970s movement. They initiated a private gallery in their home – Studio of Activities, Documentation and Propagation in which they organized lectures, exhibitions, and embarked on the documentation of artistic life in the 1970/80s.

KwieKulik approached art as an extension of everyday life, describing their practice as ‘documented, efficient, material and space activities in the definite living, artistic, political and intellectual conditions’. KwieKulik struggled for the incorporation of their work within the ideological and administrative circulation of Polish art. Their creativity had a radical, social and political dimension – it was a laboratory form of contemporary art.

After the birth of their son, Dobromierz, KwieKulik incorporated him into their art ‘By combining parent’s responsibilities with artwork, we achieve the most variable compositions of our son with subjects of everyday utilities, containers, and surfaces – in situations that inquire our home or outdoor walks – all such compositions are captured on photo slides and b/w negatives’.

Activities with Dobromierz consist of hundreds of pictures of their son in different situations, including both everyday scenarios and arrangements created by the artists. Sometimes Dobromierz lies among vegetables, on the floor amid cutlery, or sits in a cardboard box. These actions, manipulated by the parents as if using a doll, have a strong political overtone (oppression of the authorities). They are the artists’ response to omnipresent manipulation and censorship as well as introducing the absurd to reality (even though the reality of Socialism was absurd enough) Simultaneously, the aim of Activities with Dobromierz was to create a visual equivalent of mathematical and logical operations, which Kwiek and Kulik were interested in at the time.

Zofia Kulik & Przemysław Kwiek operated as the collaborative duo KwieKulik from 1971–1987. Kulik and Kwiek studied sculpture at the Academy of Fine Arts in Warsaw. Activities realised by KwieKulik include Chaltury (Hackwork jobs), Earning and Creating, Visual Games and Political Spectaculars. KwieKulik collected slides and b/w negatives from all of their actions, exhibiting 48 b/w photographs from this collection at Documenta XII in Kassel. Activities with Dobromierz has had much international publicity in recent years; the slide projection has featured in Zak Branicka 2010 and XI Biennale in Istanbul 2009. Since 1988 both artists have worked independently.