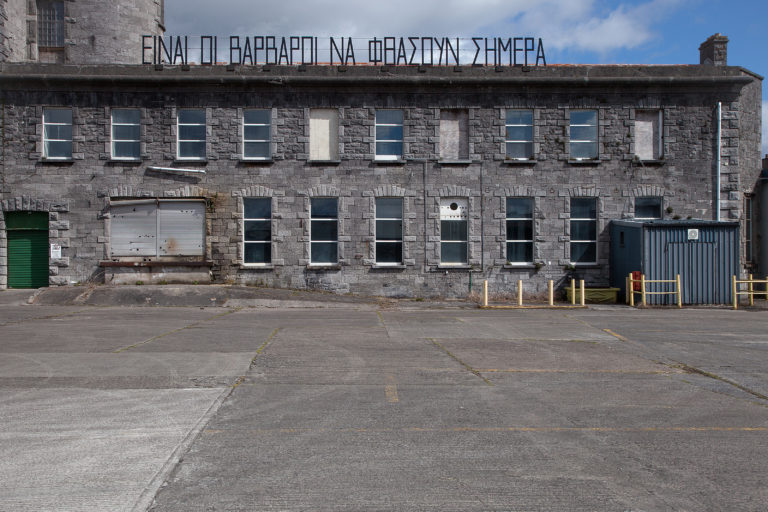 Kostas Bassanos, In Search of the Exotic, 2016, work in progress, courtesy of the artist

Kostas Bassanos’s practice deals with the conceptual and poetic properties of the medium that emerge during the process of making. Minimal gestures or the stillness of a video, the essential material – such as ink or a sheet of paper, fragments of text and any sort of found quotations, or textual references – constitute his sculptural toolbox. In his landscape-like installations, one may appreciate the iconographic mechanisms of the sublime in the context of the Romantic landscape tradition.

Bassanos’s work explores the concept of the horizon and its social and political implications in the representations of landscape and space. Alongside the use of text in the work, he considers the idea of the horizon as that which – either through symbolic representation or as a morphological device – conditions the way we perceive, experience, and represent space: as an enclosure or an aperture, a habitat or a vast open space, a wall (verticality) or a field (horizontality), an axis on an uneven surface. Our conception of space is often conceived via external representations, for example: the landscape is sometimes overlaid with textual references and notations, such as signposts, graffiti, and various narratives that inform our experience of it. The artist’s practice underlines these types of mediated experience.

In his text-based work, Bassanos revises words and materials. He appropriates phrases, verses, and excerpts, marking their sculptural qualities and their spatial context, which he then forms into sculptural objects. The text is often related to concepts such as territory, landscape and habitat, with a sociopolitical perspective underpinned by a shift from content-specific to site-specific.

In Search of the Exotic (2016) draws on ‘Waiting for the Barbarians’ (1898), a poem written by the Greek poet Constantine P. Cavafy (which also inspired the biennial’s curator, Koyo Kouoh, to title this edition of EVA International Still (the) Barbarians). At the time of writing the poem, Cavafy was living in Alexandria, Egypt, which was under British rule until its declaration of independence in 1922. This site-specific wall sculpture comprises letters, made from wooden pallets that are tinted with black ink. The work refers to the central verse of Cavafy’s poem: ΕΙΝΑΙ ΟΙ ΒΑΡΒΑΡΟΙ ΝΑ ΦΘΑΣΟΥΝ ΣΗΜΕΡΑ. The line translates as: ‘The barbarians are due here today.’ Questioning the modes of cultural perception through language, the artwork subverts the notion of the barbarian through the appropriation of Cavafy’s verse. Although, the exotic exists as a place – a Wunderkammer – or holiday destination, it is at the same time a place (or rather a means) of resistance to stereotypes, to homogenized cultures carried by hegemonic attitudes. While transnational corporations, religious beliefs and oligarchic models aim to uniform and promote an imagery of the same, the exotic finds its way to resistance through language as a safeguard of cultural identity.

Thus, the use of Cavafy’s verse in its original language reiterates the notion of exotic and resists sameness. What would happen if we were all the same? Who would be the barbarian then, who would the other be? What would be the condition to differ us from the others?

And now, what’s going to happen to us without barbarians? They were, those people, a kind of solution.

Kostas Bassanos lives and works in Athens. In 1991 he received his BA Sculpture at Accademia Clementina in Bologna, Italy, before receiving an MA Sculpture at Winchester School of Art, University of Southampton, in 1996. He holds a PhD from University of Southampton,UK and he teaches sculpture at the School of Fine Arts of the University of Ioannina, Greece. He is founding editor of the online magazine art-omma, cofounder of the artist-run online radio station Artwave Radio. He is also a founding member of Supermina Projects, a non-profit artists’ collective with Maro Michalakakos and Nina Papaconstantinou.