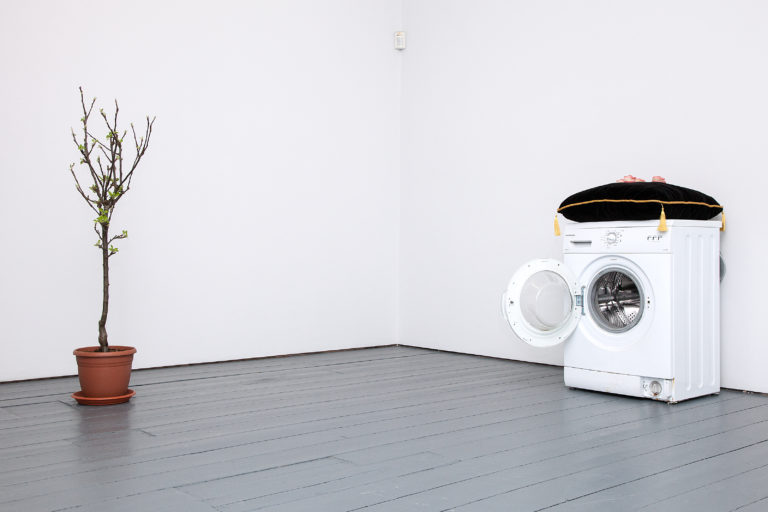 Kemang Wa Lehulere works in a variety of media, including performance, drawing, installation, text, and photography. He creates events and environments in an attempt to understand South Africa’s past and present. His work engages with the spaces between personal narrative and collective history, between archive and amnesia. The act of digging (for example, for his performance uGuqul’ibhatyi, which took place in Gugulethu township in 2008, he dug a hole in the ground using only an afro comb and discovered bones) becomes a metaphor for the pathology of history, with the artist performing the dual roles of forensic investigator and scientist. Performative gestures of unearthing, discovery, destruction, and erasure are central to his work. Wa Lehulere embraces the open-endedness of his practice, revealing a discursive space between past and present, art and literature, the self and the collective.

Wa Lehulere said: ‘On a recent visit to Limerick I dreamt I had discovered infant bones in a large plant pot in an open field. The following day, while en route to the local art school, I was fascinated by the false teeth on sale in the window of a dentist’s office. When I toured the art school, I also learned about its history and the existence of Magdalene laundries that housed “fallen women.”’

Wa Lehulere’s new work for EVA International 2016 took its cue from these discoveries, bringing together material elements that represent these chance encounters and the preceding dream. The work was a sculptural installation that comprised a second-hand washing machine, a set of false teeth (which are made from a mold of the artists teeth), a text written by the artist, and a velvet cloth.

Kemang Wa Lehulere is an artist who lives in Johannesburg, South Africa. He graduated with a BA Fine Arts from the University of the Witwatersrand, Johannesburg, in 2011. Wa Lehulere is cofounder of the Gugulective (2006), an artist-led collective based in Cape Town, and is a founding member of the Center for Historical Reenactments in Johannesburg. He was the winner of the inaugural Spier Contemporary Award in 2007, the MTN New Contemporaries Award in 2010, and the Tollman Award for the Visual Arts in 2012. He was the recipient of an Ampersand Foundation residency in New York in 2012, and one of two young artists awarded the 15th Baloise Art Prize at Art Basel in 2013. Most recently,  he was awarded the 2015 Standard Bank Young Artist for Visual Art at the National Arts Festival, South Africa.