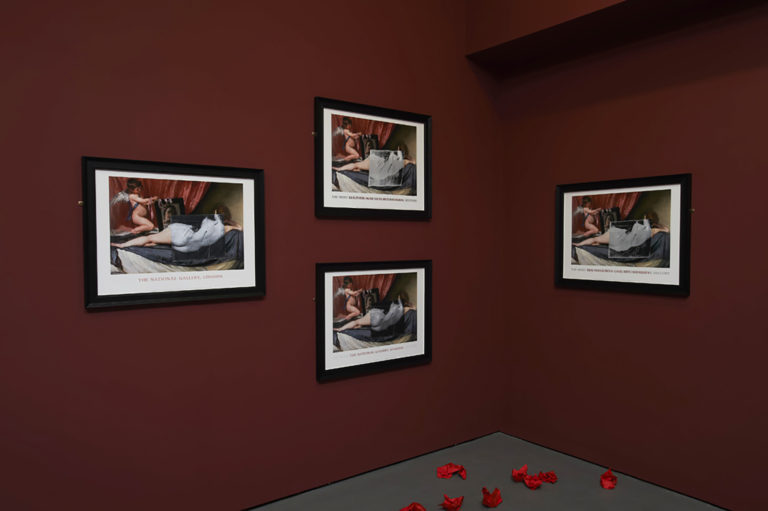 Questioning how to bear witness to the complexities of the past, Kate Davis’ work is an attempt to reconsider what certain histories could look, sound and feel like, in the present day. This has often involved responding to the aesthetic and political ambiguities of historical art works, or moments, and their reception. Referring to specific works by a range of 20th century artists and activists such as Christabel Pankhurst, Kaethe Kollwitz, Carl Andre, Willem De Kooning and Yvonne Rainer amongst others, Davis has attempted to imagine a past that could have happened differently, and delineate alternative ways to move forward.

Curtain I – VII (Die schönste Frau in der Geschichte der Mythologie) is a series of seven prints referencing the militant suffragette Mary Raleigh Richardson’s attack on Diego Velasquez’s painting, The Toilet of Venus at the National Gallery, London in 1914, and the subsequent concealment of that act. Richardson’s incisions have been historicised as her protest against the rearrest of suffragette Emmeline Pankhurst, yet the details and emphasis of each account vary greatly and her marks have been carefully repaired by conservators.

Repeatedly photocopying documentation of the effect Richardson wrought on the painting, Davis reinscribed the reproduction of Richardson’s cuts in pencil, leaving Velasquez’s painted outline of Venus to deteriorate as it is repeatedly and mechanically copied. Curtain I – VII (Die schönste Frau in der Geschichte der Mythologie) questions whether Richardson’s lacerations could be reimagined as inscriptions, or reparations, as additions rather than removals – or both.