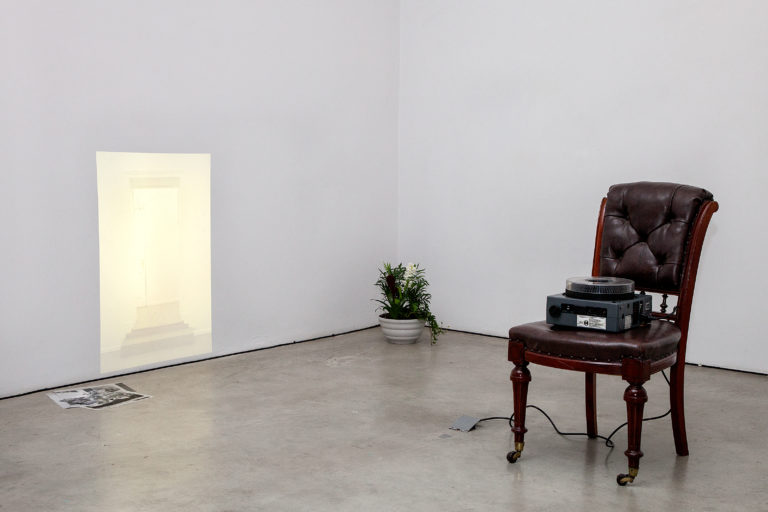 Kapwani Kiwanga’s practice manifests as video and sound installations as well as performances. In her work she intentionally confuses truth and fiction to unsettle hegemonic narratives and to create spaces in which marginal discourse can flourish. As a trained anthropologist and social scientist, she occupies the role of researcher in her projects. Afrofuturism, anticolonial struggle and its memory, belief systems, and vernacular and popular culture are but some of the research areas that inspire her practice.

For EVA International 2016, Kiwanga’s A Memory Palace (2015) offered the visitor a journey through time, constructed spaces, and assembled narratives using image and sound. As the title suggests, the idea of a palace or grand residency is central to the work. The artist references a physical edifice that no longer exists: the old Reichskanzlei (Reich Chancellery), which was located in Berlin and formerly known as Palais Radziwill or Palais Schulenburg. This building was the setting for a number of historical events and important meetings, was damaged during World War II and subsequently demolished.

The starting point for the project is the Congo Conference (1884–85), a series of diplomatic meetings that transpired within this building’s walls. European and American representatives met at the palace and made decisions that would change the geopolitical topography forever. Its decisions regulated European trade in Africa, led to the establishment of the Congo Free State, and set the stage for the ensuing the ‘scramble for Africa’: the fervent colonization of Africa by European nations. Kiwanga’s investigations take her to the period before the Congo Conference where she unearths some intriguing stories. Stories she is eager to relate.

The artist’s voice recites a text based on her research on the Congo Conference, which pulls together creation myths, acts of liberation, detective novels, and crimes against humanity. The installation transforms the exhibition place into the physical manifestation of a ‘memory palace’. A memory palace is an ancient Greek method of memory enhancement: visualization is used to organize and recall information. Information to be remembered is mentally associated with a specific location within an imagined space. Whenever this information is needed, you only need to imagine yourself in a particular location within this space where images or situations trigger remembering. Using image and spoken word in her constructed three-dimensional memory palace, Kiwanga invites the visitor to discover signs, which range from obscure to iconic, archival to popular. The images work together in a quest for new stories. A Memory Palace is a conceptual, temporal, and geographical meandering that allows new narratives to unfold and become inscribed onto the viewer’s memory