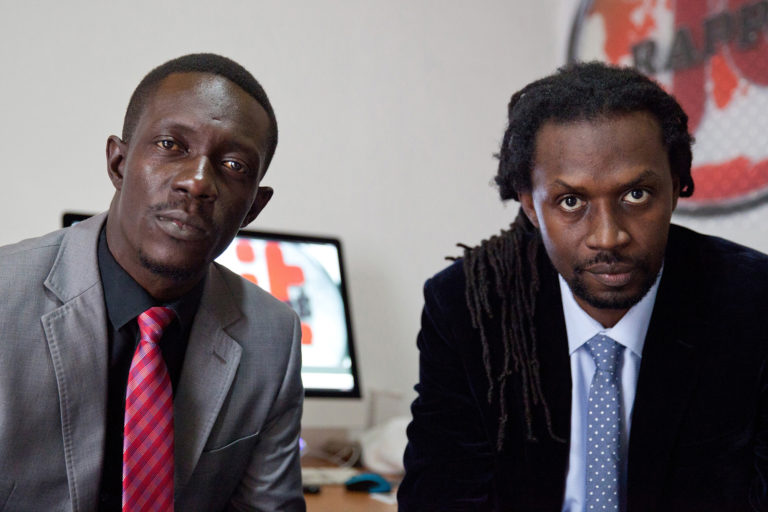 Journal Télévisé Rappé (JTR) was created by Xuman and Keyti. Launched in April 2013 by these two key figures of the Senegalese music scene, Journal Rappé is a ‘rapped’ news programme that became extremely famous in Senegal and in neighbouring countries and abroad. Conceived as a humorous show that, in the beginning took the form of YouTube videos, the aim of the programme was to amuse and to interest young people, particularly, in the news, through a format and selection of information that is closer to Senegalese daily life. Taking the form of a rap song, and shot in two versions (French and Wolof), Journal Rappé lasts three to four minutes only (which is the average length of a song) and gives a review of the salient events of the week, both in Senegal and worldwide. ‘Welcome, take a seat, we have news for you. There are good ones, there are bad ones, but we have news for you’: the opening lines of every Journal Rappé. Then, the two news MCs (masters of ceremony) dissect political, social, and international matters, with a healthy dose of parody, rhythm, and music.

Eight days after their first appearance on social networks, an official broadcaster decided to include the programme in their schedule. Broadcast on 2STV every Friday night after the traditional news, and available the next day on YouTube, Xuman and Keyti’s JTR draws a very large audience, with tens of thousands of TV viewers and Internet followers posting hundreds of comments on Facebook and Twitter.

Xuman and Keyti have the ambition to create an ‘African JTR’, that is, to produce a similar show in various African countries, as many rappers in other countries would be interested in participating to such a project. For the end of the first season of JTR, Mister X from Guinea and Tibou from Mauritania were guests of the show. Identified as ‘foreign correspondents’, each of the two rappers dissected news reports from their own country, ranging from political events to local gossip.

Xuman and Keyti would like to turn the JTR into an economic model, creating an editorial and technical staff of full-time technicians, camera operators and MC-journalists. For EVA International 2016, a selection of their most emblematic videos was presented.

Journal Rappé is Xuman and Keyti, two prominent Sengalese rappers. They have been friends for over twenty years and are widely known throughout the Senegal, not only as talented musicians but also as social activists who are not afraid to challenge authority figures, such as politicians or influential religious leaders. They participated in the ‘Y’en a Marre’ (We’re fed up) movement, which was established in January 2011, and is made up of a group of Senegalese rappers and journalists who come together to protest ineffective government and to encourage young people to vote. They are credited with helping to mobilize Senegal’s youth vote and oust incumbent President Abdoulaye Wade. The group claims no affiliation with Macky Sall, Senegal’s current president, or with any political party.

In 2013 Xuman and Keyti created Journal Rappé, a short news programme that covers the week’s news in a hip-hop format, in an often humorous way. Combining music, politics, and entertainment, the pair create two versions of each bulletin, rapping in French and Wolof, the main language of Senegal. The broadcast has become famous on TV and the Internet in Senegal and its neighbouring countries, as well as abroad.