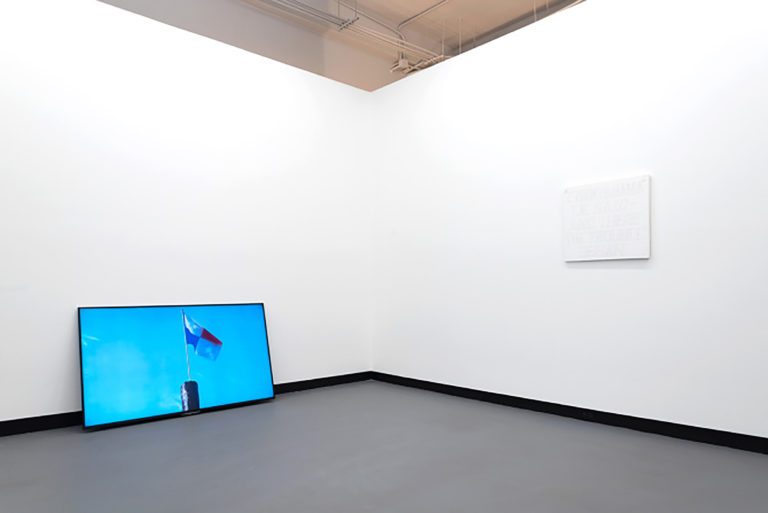 Through photography José Castrellón considers cultural changes and the impact they have on different places, such as the physical transformation of urban or rural spaces brought about by commercialism and urban construction. Palo Enceba’o (2012–14) is an installation that reflects on Martyr’s Day in Panama, a day that commemorates those involved in the riots, in which twenty-eight people were killed, that took place on January 9, 1964, over the sovereignty of the Panama Canal Zone. Panamanian students entered the Canal Zone by climbing a huge lamppost on the Zonian side of the fenced border and managed to hoist and fix the Panamanian flag at the very top. Eventually the flag was torn down and riots broke out. The incident is considered a significant factor in the eventual decision by President Jimmie Carter to give back control of the Canal Zone to Panama in the late ’70s. The work emphasises the performative action of protesters who used a streetlamp to try to claim sovereignty The lamp becomes a symbol of opposition in public space, a site for civil disobedience and anti-imperialism.

José Castrellón is a photographer whose work looks at the physical evolution of urban or rural spaces brought about by commercialism, urban construction, or any event that can generate change in a community or its way of living. He has participated in numerous solo and group exhibitions in Latin America, United States, Europe and Asia including: A Chronicles of Interventions, Tate Modern, London (2014); 43 Salón (Inter)Nacional de Artistas, Medellín, Colombia (2013); and Photoquai Biennial 4, Paris (2013). In 2009 he received the IILA FotoGrafia Prize awarded by the Italo-Latin American Institute in Rome. He lives and works in Panama.