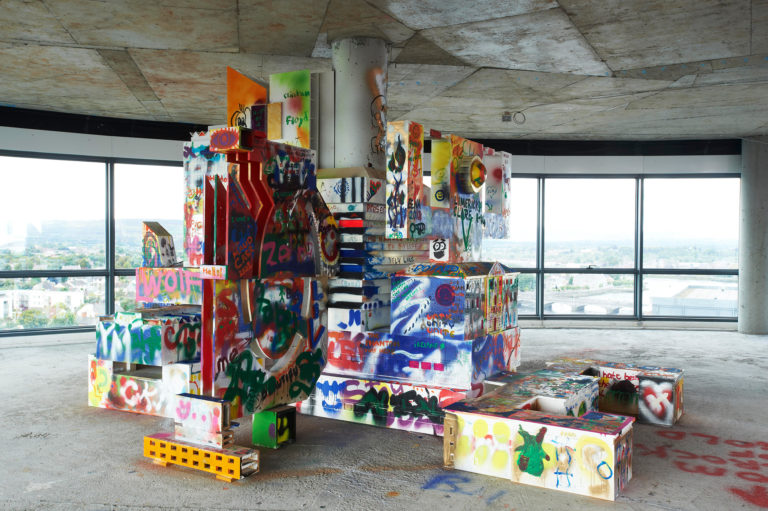 Vandalised Monuments are sculptures that confront people with a symbolisation of power in order to get a reaction/action. The responses obtained depend on the context of the place in which the work is exhibited and, at the same time, reflect idiosyncrasies of specific societies. The monuments in this project are conceived from previous research, analysing the city, the economic and socio- political reality of that place and everyday symbolic references informing a selection of buildings and symbols that combine to make up the sculpture. In After the Future a monument was made based on 12 buildings related to the financial crisis that is currently facing Europe.

The Vandalised Monuments project has been shown three times, with site-specific sculptures at Biennial in Porto Alegre, Brasil; the reopening of MALI-Museo de Arte de Lima, Peru and eva International, Limerick, Ireland. The monuments were presented in white, with an invitation to be freely manipulated by the public. Collectives were also invited to interact with the monument in each city, for example, the homeless of Port Alegre, the Black Student Federation of Porto Alegre, ContraNaturas in Lima and Occupy Limerick among many others. These reactions were varied and documented throughout the duration of the exhibitions. The continued involvement of the public in the Vandalized Monuments series becomes an overlapping of voices: positive, pessimistic, celebratory, defiant, banal, powerful.