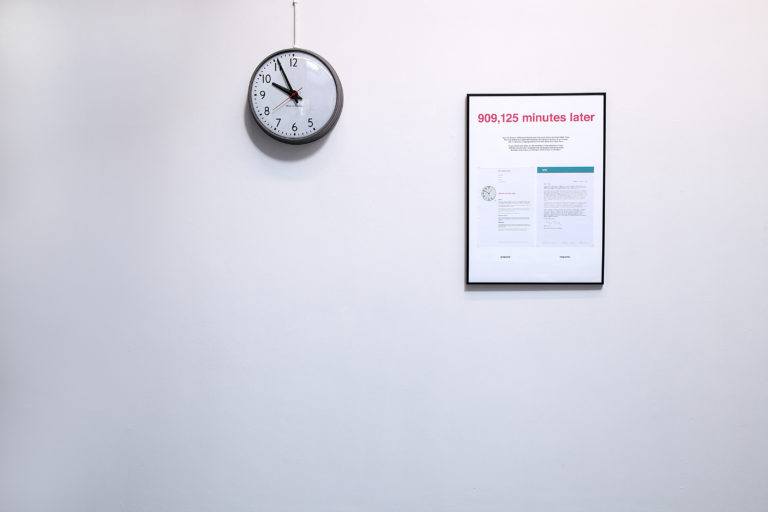 John Waid’s practice generates a continuous stream of diverse ideas, the majority of which are humorous or absurd in nature. Occasionally, however, these ideas are practical, useable, and – where appropriate and possible – some ideas become actual physical outcomes. Over a nine year period, The Halfbakery website has been a convenient outlet for over a thousand of Waid’s ideas, with the use of an undisclosed moniker preserving his anonymity.

Constantly questioning the values and methods of creativity, while also delivering dependable, inventive strategies to his students at National College of Art and Design (NCAD), Dublin: both are an integral part of Waid’s practice. In 2007 this led to the creation of the NCAD’s award-winning folio brief that all first-year applicants must complete. Understanding something of how Waid thinks is evident from the structure and tasks contained within the brief. The very first question is: “What is the opposite of a fish?”

Dualities, flies, and the eclectic habits of small animals often feature in Waid’s work, as well as Toblerones and the Belfast peace lines. He continues to develop work under the title ‘Dubious Proposals of an Easily Deniable Nature’. Waid resists categories, and is as likely to be found proposing the rocket launch of a grand piano into a non-decaying orbit for space-station astronauts to play as he is inventing a new type of motorized drinking straw.

909,125 Minutes Later (2016) is a proposal to delay the sounding of the Angelus Bell by exactly 25 minutes and 21 seconds on 24 April 2016. The Angelus Bell is presently sounds at 6.00 p.m. each evening on RTÉ, the national television network of Ireland. The delayed time is to reflect on the fact that Ireland used to have its own time zone, which was changed in 1916 by English parliamentary decree – by 25 minutes and 21 seconds. The time change was imposed on 1 October 1916. There are 36,365 days between 1 October 1916 and 24 April 2016, making an accumulated loss of 909,125 minutes at the rate of 25 minutes per day. 909,125 Minutes Later is accentuated by the presence of a simple clock with the first 25 minutes of its numerals removed, along with RTÉ’s response to the letter proposing to delay the sounding of the Angelus Bell.

John Waid is a First-Year Art and Design lecturer at the National College of Art and Design, Dublin. He is the recipient of several awards for photography, experimental, and contemporary illustration. He was the winner of a Martin Parr Award for taking the strangest holiday photograph. In 2014 his billboard design, in response to the title ‘Green’, was selected and presented in Belfast’s Central Station, as part of the the Art in the Eastside project, founded by Creative Exchange Artists Studios. His work titled Nesting Box That Might Attract Small Exotic Migratory Visitors, was exhibited as part of the Annual Exhibition, Royal Ulster Academy in 2014. In 2009 he won an award to design a range of contemporary souvenirs for the Northern Ireland Tourist Board. In both 2007 and 2008, Waid was twice invited as a finalist on the BBC Genius programme in response to two ideas: ‘rapid handrail’ and ‘zen garden mower’. On 27 September 2007, he generated and published Climbing Up the Walls of Everything, which was subsequently realized by IKEA, France, in 2013 to launch one of their stores. Also in 2007, in front of a neighbourhood audience, he performed a version of Wilson and Keppel’s Sand Dance (1933) on the roof of his shed in an effort to bed down the recently laid felt. In 2003 he participated in Dublin’s Cowparade project, in which he cut cow in half and converted it into salt and pepper shakers. Between 1978 and 2001 he painted a community wall mural in West Belfast under the watchful eyes of active paramilitaries. He assisted for exactly one hour with the installation of one of Joseph Beuys’s pieces in the Guggenheim Museum, New York. He also dug graves at Carnmoney Cemetery, North Belfast, and placed many tins of beans on shelves at CrazyPrices, according to the rules of an obscure algorithm.