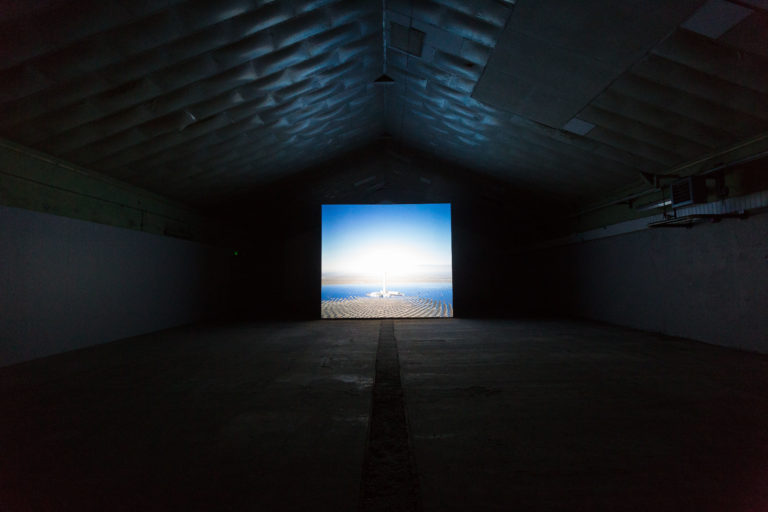 John Gerrard’s Solar Reserve (Tonopah, Nevada) (2014) is a computer simulation of a power plant known as a solar thermal power tower, which is surrounded by ten thousand mirrors that reflect sunlight on it to heat molten salts, forming a thermal battery that is used to generate electricity. Over the course of a 365-day year, the work simulates the actual movements of the sun, moon, and stars across the sky, as they would appear at the Nevada site, with the thousands of mirrors adjusting their positions in real time according to the position of the sun. This virtual world is meticulously constructed by Gerrard, a team of modelers, and programmers using a sophisticated simulation engine. Over a twenty-four-hour period, the point of view will cycle from ground level to a satellite view every sixty minutes, creating an elaborate choreography among perspectives, ten thousand turning mirrors, and a dramatic interplay of light and shadow. The monumental theatrics and sci-fi landscape in Gerrard’s solar thermal power station reminds us of our capacity to control nature to generate energy as well as the sense of wonderment technological progress brings – a wonderment previous generations might have experienced with the construction of  hydroelectric dams, such as the one at Ardnacrusha.

John Gerrard is best known for his large-scale works that take the form of real-time computer simulations, created in painstaking detail over the course of months or years. The works frequently refer to structures of power and networks of energy that have made possible the expansion of human endeavour in the past century. Recent solo exhibitions include: Western Flag, Somerset House, London (2017); Ullens Centre for Contemporary Art, Beijing (2016); and Exercise, Darmstadt Kunsthalle (2015).