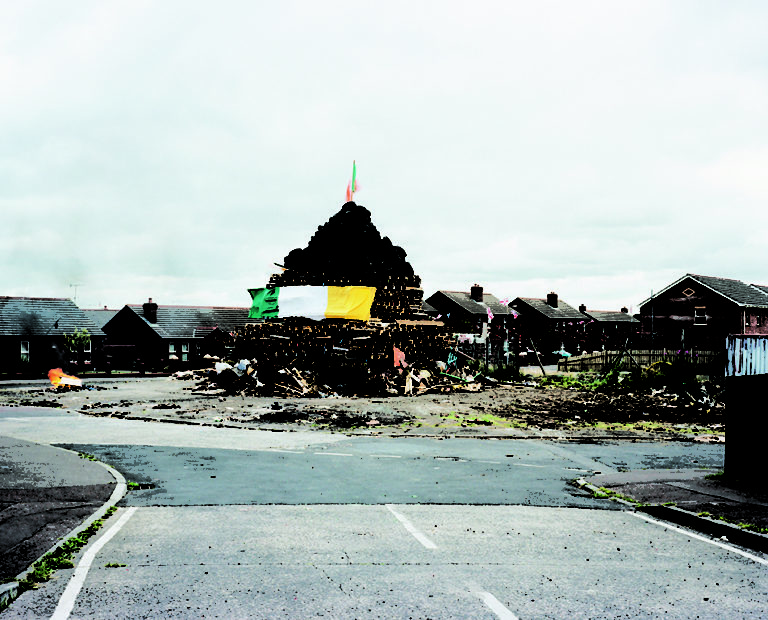 John Duncan’s practice stems from a sustained engagement with his home city of Belfast, examining and reflecting on its evolving state. Bonfires, a series of photographs produced between 2003 and 2005, documents a long-standing tradition of bonfire building by Protestant communities in Belfast. The bonfires are built in preparation for annual 11th July celebrations that commemorate the defeat of the Catholic King James Stuart, at the Battle of the Boyne in 1690. The imposing bonfire structures are a powerful provocation with which Protestant identity is asserted and a sense of solidarity and continuity is re-affirmed. Duncan’s photographs frame and measure the structures against their various social settings, revealing Belfast’s changing urban landscape and the deep divisions that, despite political progress, still affect Northern Ireland long after the ceasefire. In the past decade, such xenophobic divisions are becoming more apparent in the escalation and normalisation of  anti-immigration and islamophobic sentiments in Europe and across the globe. Duncan’s work also reminds us of the underlying threats and anxieties that Brexit poses to the Northern Irish peace process – anxieties that result from the potential reinstatement of a hard border between Ireland and Northern Ireland.

John Duncan (b. 1968, N. Ireland) has been making work as a photographic artist in Northern Ireland since the late 1980s. Selected solo exhibitions include Bonfires, Temple Bar Gallery, Dublin, Belfast Exposed, Wolverhampton Art Gallery, and Ffotogallery Wales (2009/8); We Were Here, Gimpel Fils London (2006); Trees from Germany, Belfast Exposed (2003). Group exhibitions include: Art of the Troubles, Ulster Museum (2014); Loaded Landscapes, Museum of Contemporary Photography, Chicago (2007); and Dogs have no religion, Czech Museum of Fine Art (2006). Duncan has been one of the editors of Source Photographic Review since 1994.