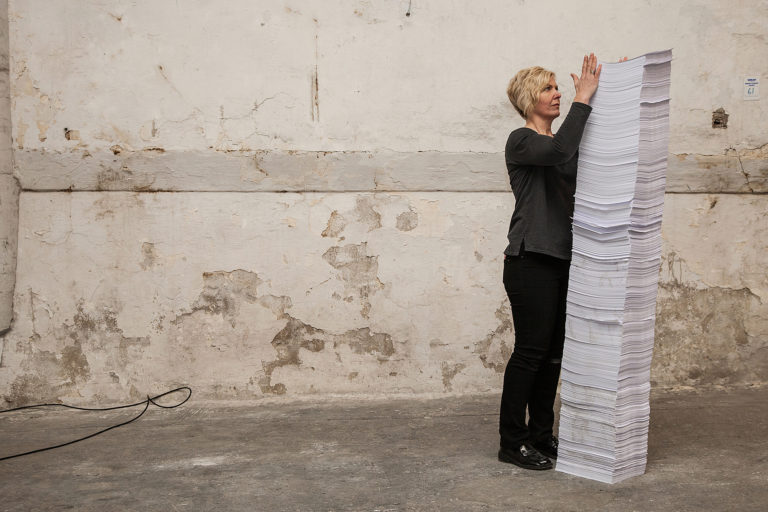 In her work, Joanna Hutton creates sculptures, installations, and videos. A performance or activity often occurs, as the artist proposes situations for which the outcome is uncertain. There is an obsessive interference – a prodding, nudging, adjusting, defining – an inability to leave things to run their course. Situated within a political and ethical framework, Hutton’s concerns respond to societal responsibility; that is, the current situation humanity faces is an immensely potent one. Several themes are explored such as transfer and exchange, circularity and repetition, transition and depletion, borders and boundaries, trace and the absence of presence.

Stack (2015) is a performance installation that comprises a printer with a white bond paper roll inserted, a laptop connected to the printer, and A4 office paper. The printer remains switched on and images are sent from the artist’s smartphone to the laptop. The paper is stacked in a column to the maximum height of 1.7 metres, which matches the height of the artist. Paper is added in sections, approximately 10 centimetres wide each time. The column becomes unstable as it grows taller, and eventually the structure needs to be adjusted or supported. However, the artist has to leave the growing stack to gather more paper. At some point the stack cannot maintain its structure and collapses with a loud and powerful sound, as the paper hits the ground and disperses a length of approximately 5 to 8 metres. The artist replaces any paper she is holding at the time of the fall and leaves the room.

The performance acts as both research of a performative sculptural form and as a metaphor of the relationships between human beings – an embodiment of political and societal processes. When placed together, the papers demonstrate their collective power. The stack is inherently unstable as it builds up and has to be managed and guided, or even coaxed. It is a balance that seems to infer a power struggle between two parties – the will of the many with its own purpose. After the paper has fallen, the remnants of the power struggle remain. The performance evokes the exact moment when there is a change from stability to instability, and this is repeated over and over. The inevitable outcome is obvious but despite this there is an extraordinary tension that develops in waiting for the resolution.