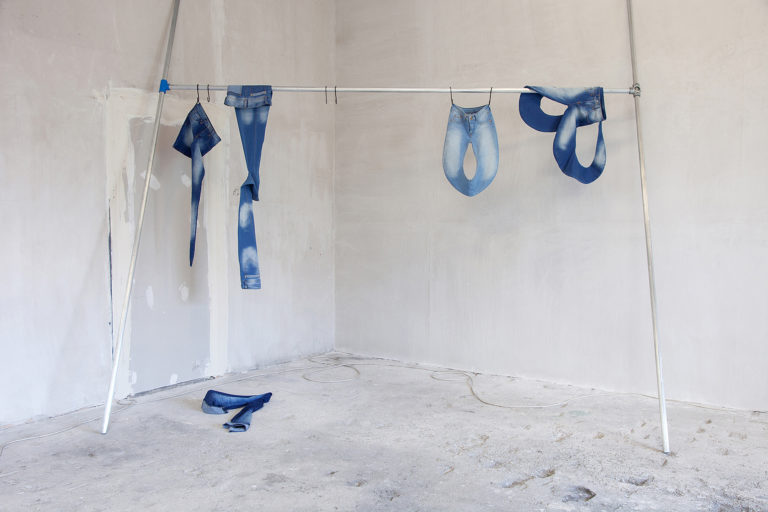 Jeremy Hutchison’s practice uses performance to construct situations that disrupt the power relations established by global capital. In the work, crises generate uncertainty, a kind of humour – a momentary strangeness in the dominant order. Many projects hinge around the manufacture and circulation of objects as a way to critically inquire into material culture and the production of desire. The work sets up a challenge: What conditions human rationality? Who determines these conditions? By rewiring the standard arrangements between labour, bodies, and objects, Hutchinson proposes alternatives to normalized power relations and the structuring of human subjectivity.

For ERRATUM® (2012), he commissioned factory workers to insert an intentional error into the products they manufacture every day, making them dysfunctional. With Oslo (2011), Hutchison inserted cartons of Palestinian milk into Israeli stores and attempts to buy them, and with Demand and Supply (2013) he outsourced his creative agency to an investment banker, and presented the work at a Swiss art fair. For Fabrications (2012), a shopper makes purchases at the supermarket checkout, but in reverse: the moment he acquires his goods, they are returned to the cashier. This procedure is repeated ad infinitum. All of these performances have a carnivalesque atmosphere, often deploying strategies of role-reversal and inversions of logic: a critical absurdity hovers around the work. Hutchison’s practice attempts to reconfigure reality – momentarily – to propose alternatives to the naturalized logic of our time.

Another work also titled Fabrications (2013) creates a fictional account of the history of Palestine. Invoking a blue land ravaged by colonization, the work describes a dazzling geological phenomenon: vast quarries of raw indigo. In the work, Hutchison examines the uncertainty that pervades Palestine’s borders, topologies, and geopolitical status – the land itself becomes a vessel for the imagination. Hutchison says, ‘For centuries, Palestine was bright blue. Indigo mines ran through the earth, like open veins. Since the beginning of the Indigo Wars (1919–present), oxidization has taken place across the territory, causing a widespread bleaching of the landscape. Today, only one indigo mine remains in Palestine. It is owned by a denim factory, Al-Aqqad & Partner Fashions.’

To produce the work, Hutchison collaborated with the employees of Al-Aqqad & Partner Fashions, a denim producer based in Nablus, a city in the northern West Bank. For six months the factory had operated under the immediate sightline of an Israeli tank – its cannon pointed directly at the factory. To understand the physiological effect of these labour conditions, the artist commissioned the factory to manufacture jeans that represented what it was like to manufacture jeans at the factory.

Jeremy Hutchison lives and works in London. In 2003, he graduated with a BA first-class honours from Bristol University, UK. He received an MFA with distinction from the Slade School of Fine Art, London, and was recently a member of the Independent Study Program at the Whitney Museum of American Art, New York, from 2014–15. He is currently artist-in-residence with [space] at the White Building, London.