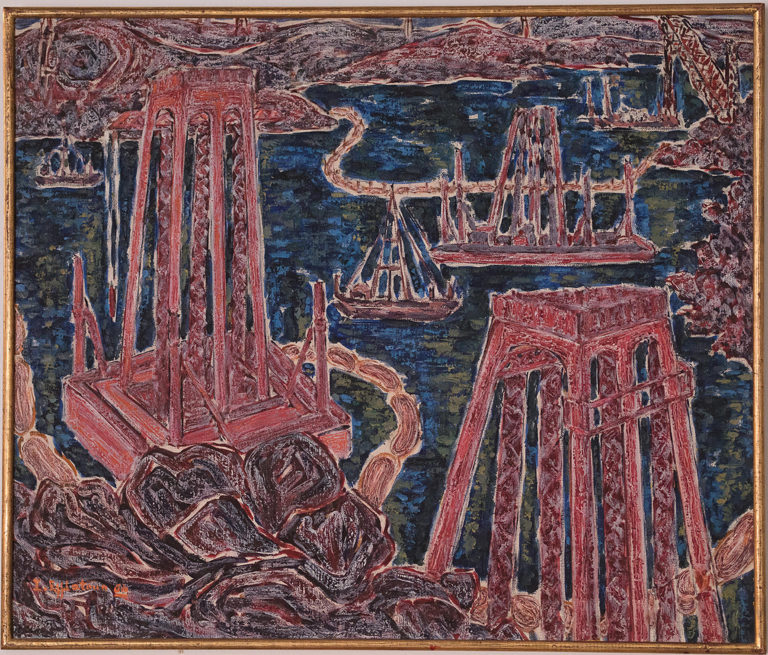 Inji Efflatoun was an Egyptian painter and activist in the communist and feminist movements in Egypt during the 1950s and ’60s. Her artwork and activism was invested in class struggle, national independence, and women’s liberation. Her early paintings were surrealist and cubist in style and portrayed themes of confinement and rebellion. Perhaps most influential in both her painting style and politics, was her painting tutor Kamel El-Telmessani. El-Telmessani was a founding member of the Egyptian Art and Freedom Group movement, launched in 1939 with the intention of using art to liberate mind and nation. Surrealism in the twentieth century was considered a subversive form of expression; artists could rebel by tapping into their imagination and paint in the language of dreams. Her rebellion also led her to imprisonment: in 1959 Efflatoun was arrested, becoming one of the earliest female political prisoners. After her release in 1963 her social realist painting style changed and she began to depict lighter, more textured and brighter scenes of the working class, as can be seen in Les diables rouges (1964), or of the daily lives of women.

Inji Efflatoun was an artist and political activist who lived and worked in Cairo. Notable exhibitions include: Gallerie Adam, Cairo (1952); Sao Paolo Biennial, Brazil (1953); Cairo Atelier (1956); Alexandria Biennial, Egypt (1958); and the Egyptian Academy of Fine Arts, Rome (1981). Efflatoun garnered considerable attention in Egypt and abroad in her lifetime. Her artwork was exhibited twice at the Venice Biennale, and in shows across Europe, including Rome, Berlin, Paris, and Prague, among others.  In 1992 her paintings were exhibited in the Egyptian Art Academy in Rome, and more recently, in 2009 her work was featured in a show titled Creative Egyptian Painters held in Berlin and Vienna.