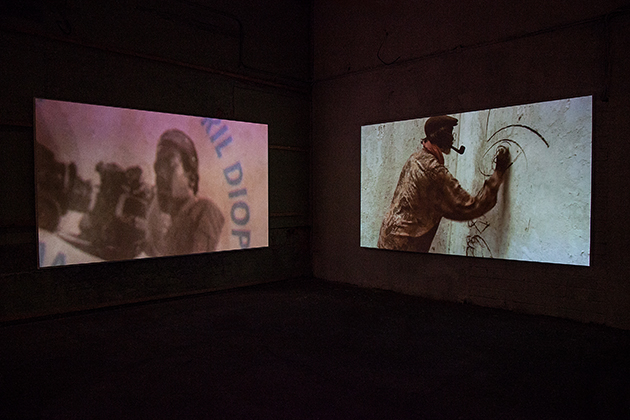 While developing an artwork, Ican Ramageli often utilizes collaboration and artistic exchange. He has participated in many projects that emphasize a collaborative ‘us’ – that is, a collaborative us who work together, marking the expansion of fields of action and sharing, claiming the consciousness of interdependence and need for mutual aid.

The film Joe Ouakam, le berger (2015) follows the path of seminal Senegalese artist Issa Samb, who is one of the founding members of the Laboratoire Agit’Art, which was formed in 1973. Samb is an internationally recognized artist known for his groundbreaking, interdisciplinary work that encompasses sculpture, performance, painting, and theatre. His work is considered to draw from both African traditions and the European avant-garde movements, such as Dada, Surrealism, Situationism, and Fluxus.

Samb has joined the long tradition of artists who do not produce artworks. He is one of those artists who instead construct their own lives as a personal masterpiece – sometimes it is even their sole work of art – because they do not need to create artworks to be seen as artists by their contemporaries. They could be considered ‘self-artists’, whose principle canvas is their lives, their ways of being and of being seen. An artwork may occasionally be produced or never at all, but either way this has nothing to do with their status as artists, the role allocated to them, or the importance they are given. Samb carries on this ancient tradition with aplomb and, by giving Senegal a key role in this peculiar global history of  ‘artists without anything’, he invites all of us to ask what dreams we have in common or what drives us to persist in producing, accumulating, hoarding, selling, buying, earning, overtaking, conquering …

With Joe Ouakam, le berger (2015) Ramangeli pays tribute to a man he knows well, who he sees as inspirational. As Ramangeli explains – as Diogenes did in ancient Athens – Samb astounds contemporary Dakar with his decision to live an excellent life out of nothing, a beautiful life without anything: no salary, no sales, no home of his own, no luggage when he travels, no electricity in the centre of Dakar, no appliances old or new, no telephone, no boss, no guide, no obligations. He often lives without speaking, without eating, and of course always without working, without … anything. And there is one respect in which Samb goes even further than the Cynic philosopher in his privation: Samb does not reprimand other people for using things he does not use himself. He doesn’t rebuke anyone or anything. As devoted as he is to evaporation, scarcity, frugality, and emptiness – to nothingness, in fact – he has one treasure in abundance: his love of other people and of universal liberty.

Ican Ramageli is an artist who works with video, photography, performance, painting, and music. He is a member of Laboratoire Agit’Art, an art collective founded in Dakar, Senegal, in 1973 by writer and performer Youssouf John. The goal of the collective is to revitalize artistic production and to critique institutional frameworks, including the philosophy of négritude in particular. John soon left for Martinique and the group/workshop was handed over to the artist Issa Samb. Ramageli has been in dialogue with Samb – the seminal Senegalese artist known for his groundbreaking interdisciplinary work that encompasses sculpture, performance, painting, and theatre – for more than ten years. Ramageli’s work focuses on social and political issues from everyday life. His work is always related to its environment and to the daily realities. While developing a personal work, Ramageli often prefers collaboration and artistic exchange.