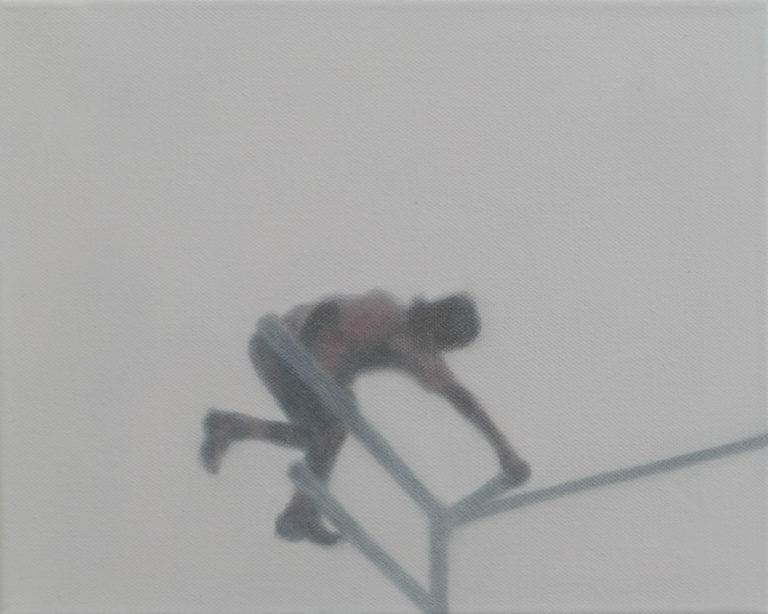 Wieczorek’s practice looks at how the digitisation of everyday life shapes the dynamics of contemporary society, in particular our social and cultural identity and notions of citizenship. Wieczorek makes paintings that are based on low-res digital images found on the internet. Stripped of their speciﬁc contexts, the images assume a more malleable, subjective significance that transcends the original. They also establish a dialogue be-tween painting — a traditional visual medium — and contemporary digital media. The ‘found’ low-res images are presented as objects of aesthetic consideration in their own right. In the series Crossing (2017), blurred figures are seen mounting fences, walls, and presumably crossing borders — geographical, political, and cultural. While the phenomenon of borders and attempts at controlling the movement of people has existed throughout history, current political events have brought this to the fore. In his paintings, Wieczorek presents the border as an imposed but permeable construct — a hope for those who aim to heroically cross it.

Ian Wieczorek’s practice is primarily based in painting, installation, and curating. He has presented recent solo shows in: Galerie Katakomby, Brno (2015); Queen Street Studios, Belfast (joint show, 2014); and The Courthouse Gallery, Ennistymon (2013). He has exhibited widely in group shows in Ireland and internationally.