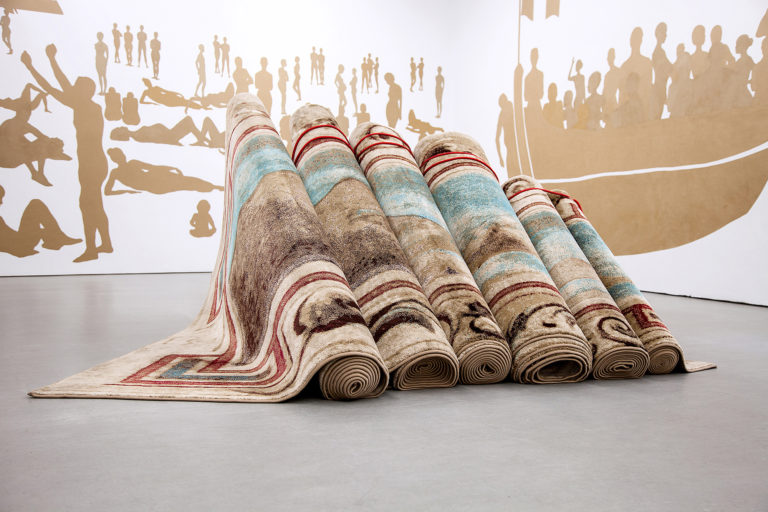 Hera Büyüktasciyan, Destroy your house, build up a boat, save life, 2015, carpet, dimensions variable, courtesy of the artist and Mustafa Hazneci, SALT

To weave connections between identity, memory, space, and time, Hera Büyüktaşcıyan considers the absent or invisible figure of the other. She is a storyteller, integrating metaphors from historic and iconographic elements to open up new narratives. Water is a recurring theme in her practice, referring to what the artist understands as the fluid, aquatic nature of memory. Her most recent works investigate the meaning of absence within collective memory. There is a focus on urban transformation and the disappearance, invisibility, and sense of isolation it causes.

‘Destroy your house, build up a boat, save life’ is a quotation taken from the story of the Great Flood found on ‘The Epic of Atrahasis,’ written on a Babylonian cuneiform tablet. According to the inscription, the god Enlil (ruler of the air, wind, and storms) plans to destroy humans by sending a devastating flood. Yet the god Enki (ruler of waters) sends warning of this impending catastrophe to Atrahasis (a mortal) and instructs him to build a boat to protect and save life from the rising waters.

The description of this imaginary boat, also known as ‘Noah’s Ark’, becomes an instrument for Büyüktaşçıyan to connect land and sea, life and death, loss and perseverance, past and future, the known and unknown. The boat also acts as a metaphor for the rescue and preservation of belongings, as well as fragments of memory, that are gathered up and taken from one context to another in the event of traumatic upheaval, exile, deportation, and other forms of societal breakdown.

When Enki asks Atrahasis to pack up his life, Atrahasis does not know where the journey and his boat will end up, so he sets sail for the unknown. Büyüktaşçıyan nods towards this uncertain future by appropriating a ceiling painting originally made for a domestic dwelling in the Siniossoglou apartment building in Istanbul. The building now houses the SALT Beyoğlu gallery. This suggestive landscape is collated across rolled carpets, invoking both the act of packing-up and the quiet belief that one can lay the foundations for a new home with just a carpet. The local area, then known commonly as Pera, was witness to a massive forced exodus of minority populations in the mid-twentieth century. The sudden departure of the original dwellers of the Siniossoglou apartment, which occurred around 1955, adds another layer of narrative to the list of ruptures evoked by the installation. All traces of this traumatic period have disappeared from the building, but the impact of this event, or other similar events, can still be imagined by contemplating what happened in the past, its affect on the present, and the uncertainty of our shared future.