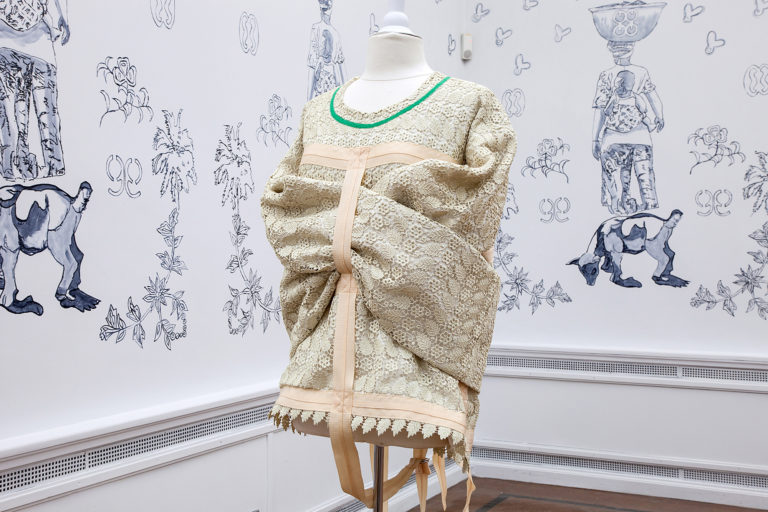 As an artist straddling borders between continents and cultures, Godfried Donkor is interested in historical and sociological issues, and specifically in the shared history of the peoples of Africa and Europe. In his work, he reflects on the commodification of people in all its facets. Borrowing iconography from mass media and mixing styles and imagery that originates from conflicting sides of the political and cultural divides, Donkor creates works in painting, mixed-media collage, print, and most recently video. Donkor emphasizes creolization as the creative force that emerges from cultural interaction between societies. His works frequently depict contemporary figures shown rising from cross-sections of old sailing ships, a recurrent metaphor for the transportation of slaves from West Africa to the New World. Whether he represents a boxer, a football player, or a pin-up girl, each one has the same value in the trafficking of people – from its most extreme form, slavery, to its more subtle variations in sports or the entertainment industry today.

Lace has been used for a long time in Donkor’s work. For instance, at the end of his residency in Nottingham in 2008 he gave a presentation entitled ‘Once upon a Time in the West, There Was Lace’ at the New Art Exchange and at Nottingham Contemporary. For his presentation Donkor chose the subject of lace – an exquisite and apparently innocuous symbol of Nottingham’s heritage, this city being the centre of the lace industry during the British Empire. The cotton that was threaded with such skill to create coveted status symbols probably came from slave plantations. Through his work Donkor examines how this sort of transaction is familiar in present day too. The production of luxury goods can still be considered synonymous with gross exploitation and human misery far from Britain’s own shores. The phrase ‘slave labour’ is frequently used when discussing the sweatshops that globalization has produced.

For EVA International 2016, Donkor created a new work on the history of lace with lace: the lace design  made from a series of drawings by the artist, inspired both by traditional Limerick lace patterns and by images from Donkor’s own visual archive. Along with Adinkra symbols (symbols of hope and commitment of the Ashanti people, Ghana) are contemporary images from the city of Kumasi, Ghana, and historical images of Europe and Africa. This lace piece was handmade – an extremely long process – in Limerick. This lace was exhibited along with two garments made of commercially produced lace from Ghana: a jumpsuit and a straight jacket. Donkor’s research into the history of the defunct lace production in Limerick city echoes his own experience of the continuing use of and craze for lace in West Africa – in his case Ghana.

Godfried Donkor moved to London in 1973. He studied art and art history at Saint Martins College of Art, receiving his BA Fine Art (Painting) in 1989. He studied postgraduate Fine Art at Escola Massana, Barcelona, Spain, before completing an MA in African Art History from the School of Oriental and African Studies, University of London, in 1995. Utilizing painting, mixed-media collage, and printmaking as well as video, Donkor’s work is focused on historical and sociological issues and, in particular, the shared history of the peoples of Africa and Europe. In 2010 Donkor was approached by PUMA Sports to design new football uniforms for the Ghana national football team.