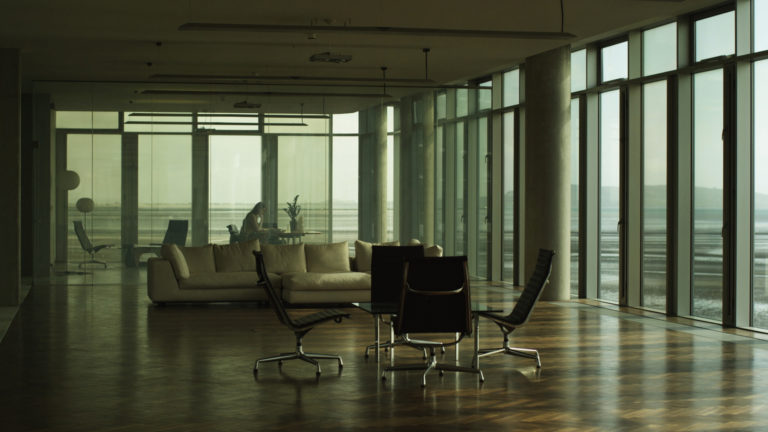 Using cultural matter as material-medium, Gavin Murphy’s work involves the assemblage of unique fabricated elements, sourced and found objects, video/film, sound and photography. It references the arts, history and theory to form a spatial and temporal narrative arc made up of intercommunicating texts, combined with an interest in the sculptural possibilities of cinematic structures and mise en scène.

Something New Under the Sun is a film concerning ideas around progress, value, novelty, our experience and perception of time and the contemporary, via an attempted portrait of the demolished IMCO building, and the work of its chief designer, Oliver P. Bernard. The film draws from significant research conducted in Dublin and London into social, industrial and personal histories.

IMCO was a large firm of dry cleaners who ran a central cleaning and dying plant, taking delivery of items of clothing from all over the country. The second phase of their building, dating from 1939, incorporated a concrete and glass tower ‘of a very modern character’. Bernard, a noted architect, scenic and industrial designer, is credited with being instrumental in developing conservative Victorian British taste in a modernist European direction. The IMCO building was, during its brief existence, a major landmark on Dublin’s south coast, yet is all but forgotten today. Similarly, the industrial processes that the company carried out, once part of the fabric of everyday life, are entirely undocumented.

Gavin Murphy is a visual artist, curator and a director/curator of the artist–run space, Pallas Projects/Studios, Dublin.