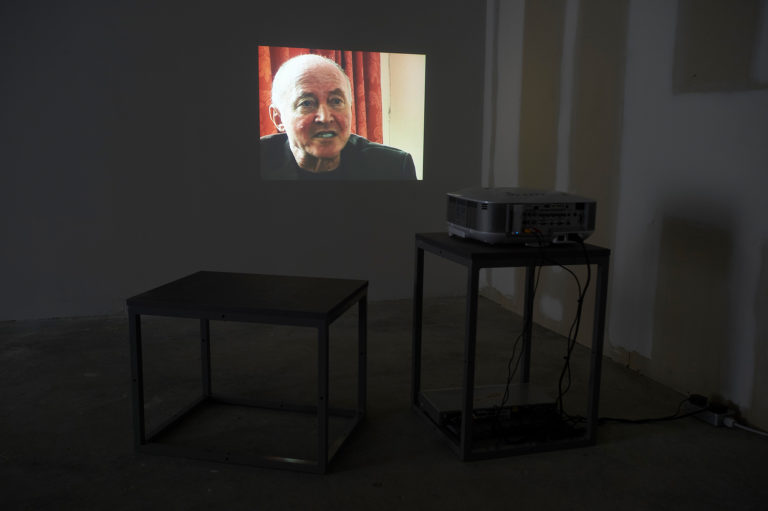 In A Laboratory of Perpetual Flux, in-depth interviews with artists and philosophers conducted for Daly and Waugh’s film The Art of Time, are presented in their ‘raw’ unedited state on a series of video monitors, digital screens and projectors in different locations. In the context of After the Future’s attempt to diagnose the present moment as one of imminent crisis and metamorphosis, Daly and Waugh’s project aimed to function as an intervention within the space of the exhibition, seeking to create junctures in which accumulated thoughts and effects could acquire momentary power and nodality. This generates a spatio-temporal schism for the viewer as he/she encounters a shard of fragmented narrative within the exhibition space.

If Franco Berardi’s After the Future extends his preoccupation with the panic-state of semiocapitalism diagnosed in his The Soul
at Work (echoing Paul Virilio’s view that we live in a state of hysterical distraction he terms ‘picnolepsy’), then each speaker filmed could be said to demonstrate a strategy of thinking which resists this state, creating new relations of thought and concepts adequate to artistic creativity in our present culture. Each speaker becomes in this schema a kind of ‘character actor’ in the broader framework of the exhibition’s narrative, a guide rendered essentially vulnerable by the precariousness of the subjects discussed, and the multiple identities and temporalities invoked in their articulations.

Fergus Daly has a background in English literature and philosophy, with a particular interest in the relationship between philosophy and artists’ film. He is the co-author of Leos Carax, Manchester University Press, 2003; contributed essays to Movie Mutations, BFI, 2003 and Jean-Luc Godard: Documents, Centre Pompidou, 2007. Films and videos include Abbas Kiarostami: the Art of Living (co-directed with Pat Collins), Experimental Conversations, 2006; Armand Gatti: Welcome to our Battle of Images, 2009 and Matter & Memory, 2010. Daly was awarded first prize at Claremorris Open exhibition 2011 by Chris Hammond, Director of MOT Gallery, London.

Katherine Waugh is a writer and filmmaker based in the west of Ireland. With a background in philosophy, Waugh has a particular interest
in time-based media, and has lectured on the relationship between philosophy and contemporary art. She curated and moderated a symposium on the theme As Slow As Possible (after john Cage) for the AV International Art Festival, Newcastle, 2012. She has contributed to a number of art and film publications, and writes regularly for national and international artists’ catalogues.

Fergus Daly & Katherine Waugh co-directed the film The Art of Time, 2009, which has screened in New York, Paris, the ICA London and most recently in IMMA, and Outliving Dracula: Le Fanu’s Carmilla, 2010. They also co-directed (with Tom Flanagan) the Different Directions experimental Film Festival, Galway from 2008–2010.