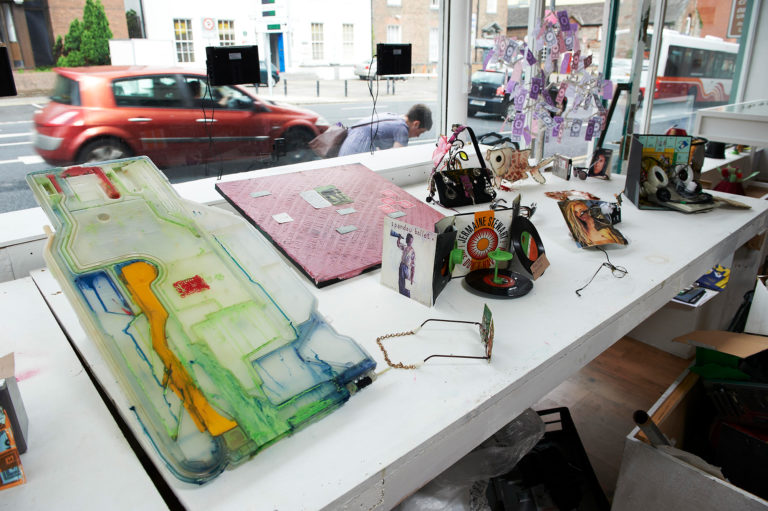 Re-Possession consists of a multi-part work that addresses the idea of object identity, particularly the stolen or confiscated objects that are found in the Lost and Found storage of Garda Stations, train and bus stations and other Limerick institutions. The project structure parallels the archetypal story of tragedy leading to recovery and growth.

Re-Possession explores the psychological impact of loss through personal stories (tragedy), the methodical documentation
of objects (taking inventory), and the rehabilitation of the object by the craftsperson (resurrection).

Stories of loss or theft.

Inventory of objects from departments of Lost and Found and an extensive catalogue of lost and found things made by painting, drawing, photographing, and writing. The inventory was personal and intimate, conveying a new meaningfulness in “non-possessed” things.

Reinvention of our collected objects by reimagining and recreating them in an ongoing workshop space in Faber Studios.

Exhibition of a selection of lost and found objects, collected stories, a large inventory book. The Big Book and the objects created in the ongoing workshops. The public were invited to visit Faber Studios to peruse or contribute to The Big Book and take part in reinventing things.

Re-Possession promotes the value of reuse and a culture of exchange in the community.

Every Wednesday Faber Studios held an open public workshop as part of Re-Possession. The public were invited to partake in a series of workshops that sought to revalue and transform objects collected from Lost and Found Departments. The public could also bring along their own objects for use in the workshop.

Caelan Bristow (b. 1965, Canada) studied at The American university in Paris, the Architectural Association, London and the Southern California Institute of Architecture. Since then Bristow has been involved in both art and architecture practice, in the uS, europe and Ireland. As an artist and curator, Bristow has initiated and developed exhibitions and festivals including the arts programme as part of Birr Vintage Week & Arts Festival, the Hilltown Music Festival and was a Co-Director of Catalyst Arts, Belfast from 2006-2008.

Marie Connole (b. 1981, Clare) is a graduate of nNCAD and NUI Galway/ Burren College of Art. As Chair of Ground up Artists’ Collective she curated Rianta, a GuAC arts event located throughout Ennis in 2011. Other projects include Aughty Public Art Projects (2010), curated by Dr. Áine Phillips; and The Midnight Court (2011), a touring participatory project with artist Maeve Collins.

Aaron Lawless (b.1986, Dublin) is an artist and Co-Director of Faber Studios. Lawless’ work involves recycling leftover materials found
in the vicinity of his studio into startling arrangements, exhibited as installations or sculptural entities. In turn, these forms are used as discursive touchstones for public participation through active conversation and organized public events that challenge the relationship between the individual and artwork.