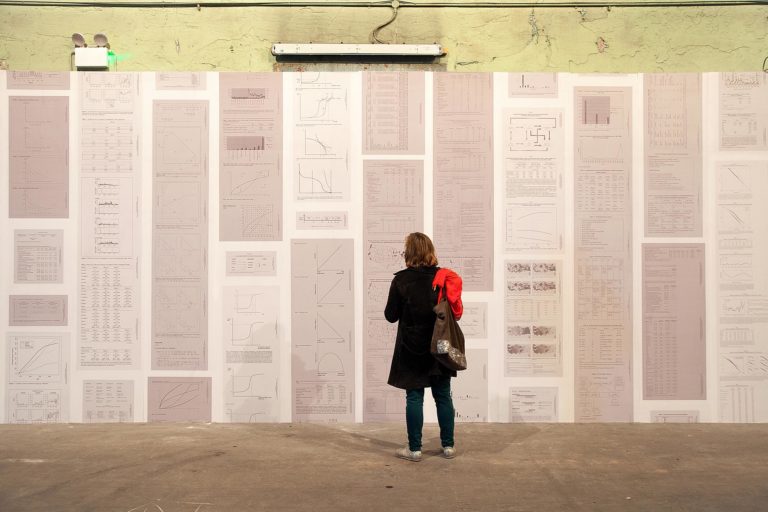 With a background in the social sciences, Eric Baudelaire has spent several years in research institutes reading theory and combing through archives, studying theoretical models intended to shed light on past histories, and advocating policies of governance to deal with future crises. In effect, Baudelaire was searching for frameworks: models created through the association of words, figures, diagrams, and tables. Models into which particulars can be imported, and general conclusions exported.

Over the course of those years, he recognized that politics is too fluid to fit inside a single theoretical framework; it tends to leak through the porous boundaries developed to contain it. Although he focuses on the same subject matter in his current work, his approach has changed. In search of forms to address what lies beyond understanding in life and politics, he has migrated from tables and diagrams towards the film camera and the exhibition space. Over the last decade, he has employed a multidisciplinary practice – incorporating photography, filmmaking, printmaking, and installation – as an alternative approach to the quest for frameworks. In recent projects he has taken a new interest in these old diagrams, and has started to collect them once again. This time, he is looking at them differently: from the perspective of aesthetics.

FRMAWREOK FAMREWROK FRMWRAOEK FMRAEOWRK FWRREOMAK FEARMOWRK FORAMRWEK FWMAOERRK FOMARERWK FEMORWARK FMRWREAOK (2016) is an attempt to produce a comprehensive collection of all of the images that social science fabricates to explain the unexplainable. The work is presented as a space, a room covered entirely in diagrams printed on wallpaper. The figures and tables lining the walls have been sourced from peer-reviewed academic journals. Each and every diagram in this growing collection is concerned with the question of terrorism. Sociologists, economists, game theorists, political scientists, and psychologists attempting – with their own theories and tools – to design models to make sense of terrorism, an elusive concept that escapes both rationalization and understanding. Surrounding the viewer are 413 figures and tables, including: a diagram that maps the organizational genealogy of the Japanese Red Army; a panel that proposes a game-theory modelization of terrorist negotiations; and behavioral styles in aerial hijackings. An accompanying subdued monotone voice recites an alphabet or alphabétaire of terminologies extracted from the same journals.