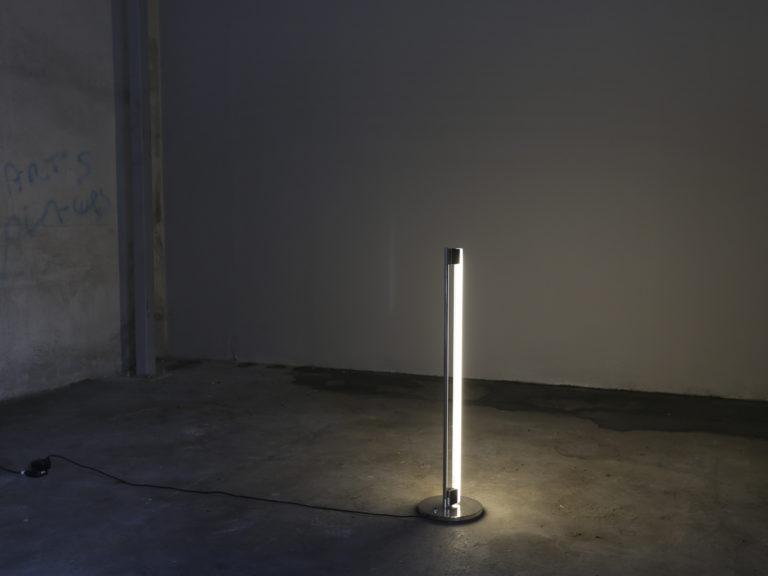 Regarded as one of the most influential 20th Century designers and architects, Eileen Gray was self-taught and one of the leading members of the modern design movement. She spent her adult life in Paris where she became well known as a furniture and interior designer. She also practiced as an architect in the late 1920s. In her furniture and interior design, she often combined traditional techniques with modern aesthetics, for example her lacquer furniture used a Japanese tradition often in an art deco style. Gray was later influenced by contemporary modern architecture and the abstract geometric works of Dutch avant-garde group De Stijl. She began to design precise and functional furniture using inventive materials. She was the first designer to work in chrome, and was original in her use of aluminium, celluloid, tubular steel, bakelite and cork. In the 1920s the architectural tungsten strip light became popular, so Gray “decided to design a floor lamp using just a lit tube.”

Eileen Gray was born in Wexford, Ireland. She spent her childhood in London and was among the first women to be admitted to the Slade School of Art, where she took up painting before undergoing an apprenticeship in a London lacquer workshop. The experience she gained in working in this highly specialised medium was to influence her profoundly when she moved to Paris in 1902. In 1922 she opened her own gallery, Jean Désert, in Paris as an outlet for her designs. Examples of her early work are in the V&A collection and her E1027 adjustable table is in the permanent design collection of The Museum of Modern Art, New York. The Royal Society of Arts appointed her a Royal Designer for Industry in 1972. Eileen Gray died in Paris in 1976.