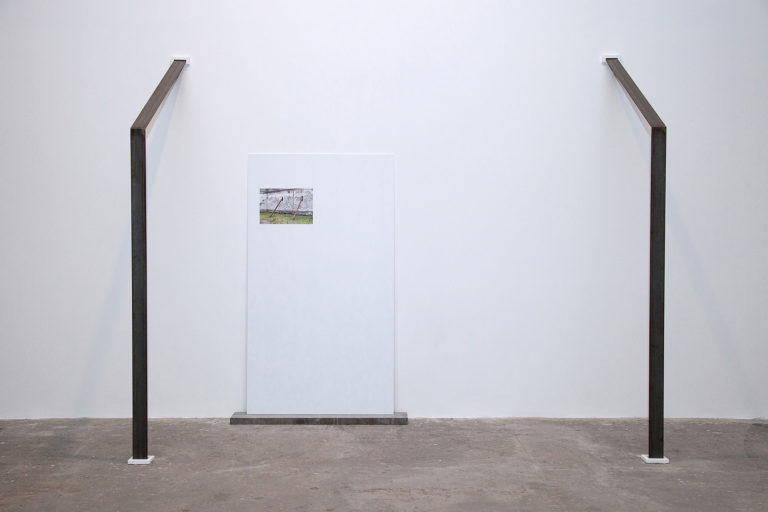 Dorothy Hunter’s practice is rooted in the process of removal that accompanies inherited history and space, and the conflict of representation in both lived and declared history. In regenerated cities with a contentious past, visual art can be a source of both redemption and provocation. Cultural response to controversial moments from the recent past sits somewhere between sentimentality and standoffishness, between the boundaries of what is acceptable and what is not, slipping in and out of relevance over time.

While certain sociopolitical and historical reference points can have a direct effect on art and art making, art can be seen as a stage to process and respond; in turn, it can have a reciprocal impact on individuals, attitudes, and society itself. With this kind of awareness in mind, along with ideas surrounding regeneration and a consciousness towards public relations, Hunter utilizes space so as to straddle the different arenas of exhibiting (for example, between the art gallery and museum, storage and display). Using gathered materials (both personal and those found in the public domain) with more formally created abstract objects, she plays with the idea of sincerity behind the exhibition of works of art, the construction of the exhibition space, and how objects are placed. Specific times and spaces are aligned, perhaps incidentally or intentionally.

Unassigned Monuments, One through Six (2013) is an installation based on changes of particular monumental forms. The sculptural objects relate to the photographs, either found or taken by the artist, and can be read as reconstructions, maquettes, or actual monuments. Employing prop-building techniques, exhibition-based image supports, industrial materials, and displays as sculptures, the collection of objects sits somewhere between a museum display and gallery exhibition. Objects of varying authenticity and longevity are prominently placed or highlighted, while other pieces are displayed in an inconspicuous way.

The bombing of Nelson’s Pillar in 1966 left a castrated space in the middle of Dublin’s O’Connell Street. A media image of the broken totem is shown alongside another obelisk devoted to a singular man: George Washington. The photograph of the Washington monument, taken circa 1860s, shows the unfinished construction of the structure that was halted because of lack of funds, an internal conflict, and the outbreak of the American Civil War. Once interest piqued around the centennial of the signing of the Declaration of Independence, building resumed. Each of the images shares a similar source of power, and in both cases the symbolism of the monuments have become increasingly pronounced over time.

Dorothy Hunter lives and works in Belfast, received a BA (Hons) Fine Art from Falmouth University, Cornwall, in 2011. In 2015 she was art critic in residence at Studio Das Weisse Haus, Vienna. In 2014 she received the Visual Artists Ireland / Digital Arts Studios residency award, and in 2013 was the recipient of the Production CCA grant and outbound residency from the Centre for Contemporary Art (CCA) Derry~Londonderry. From 2012–14 she was codirector of Platoform Arts, Belfast.