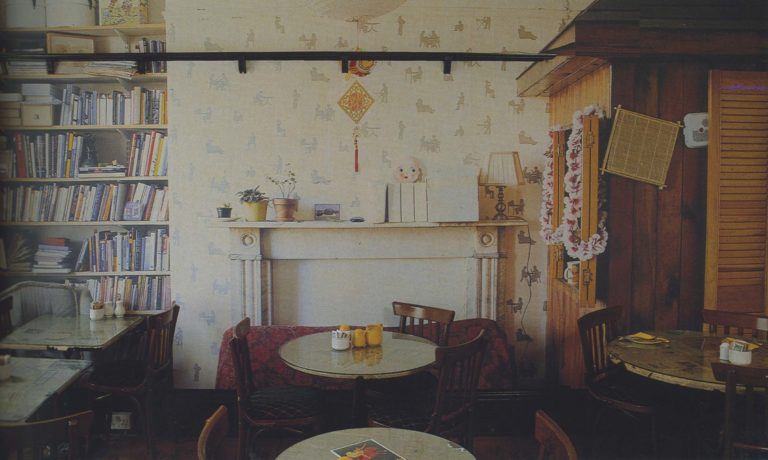 An environment exists when we perceive its qualities or functions in our daily lives. Our private spaces have to respond to our personal demands. By attaching our personalities to private space we are acknowledging a primitive instinct to leave our trace on living space. Deirdre has allowed the viewer to visually poke about her living room by translocation. By doing so the viewer has been subtly asked to reappraise the dining room space or what we perceive its role to be now that it has become a host environment to another. The Furze Bush has always been a meeting place with an intimate persona. To have this space reorientated, invaded by another so bold, is confrontational, but only briefly. Deirdre’s presence cannot be avoided.

A simple idea – wallpapering one environment with another so as to allow each to be emphasised by the nature or function of the other. In the comfort of the café you become more intimately aware of the details of this new environment. The walls of the original living room have a wallpaper pattern which consists of silhouetted forms, revealing Deirdre’s daily routine. The pattern is even and tireless, reflecting perhaps the seemly regularity of human activity.

To expose a personal space to an unsuspecting public can be quite direct for some viewers, but a little assimilation may be needed. This piece would not be as successful in a conventional gallery. There would be no fun without the environmental interplay of restaurant function/time versus visual statement. It can’t be avoided; the viewer must assess Deirdre’s living space while waiting to be served.