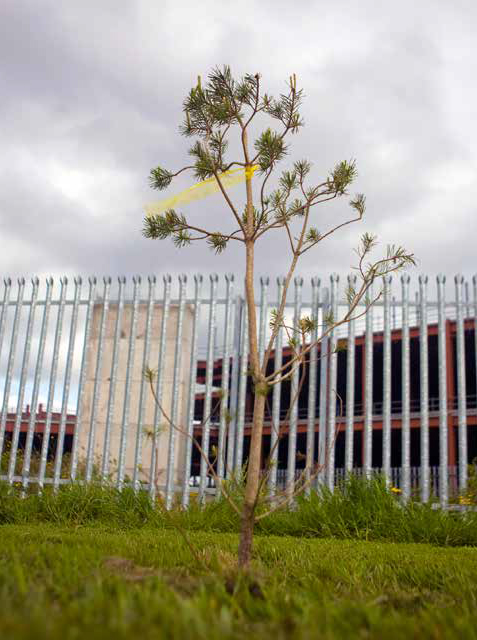 The struggle over space is always related to the social relationships that are generated within the logic of place. Space revolves around people occupying, owning, seizing, developing, and reclaiming place. The residents of Castletroy View have lived with the daily site of a rusting failed shell, the Parkway Valley Shopping Centre, originally deemed the new “economic gateway” to Limerick and a no man’s land of disused equipment and debris for the past five years. Their intention is to reclaim their space by not only challenging the view of the failed development that currently overlooks their green, but also by reimagining their place as it should be.

“We would love to see our green area restored to some natural beauty by the addition of mature native trees to shield us from the industrial eyesore beyond our border.” Maggie Jardine, Castletroy View Resident

Urban Tree Project was a collaborative and participatory process with the artists Deirdre A Power and Jacki Hehir, the residents of Castletroy View and NGO, The Woodland League, which had evolved into a state of pro-active involvement inspired by the children of Castletroy View.

Through social engagement, Power’s practice bridges the intersection between civic authority and communities’ needs whilst offering resources and tools that help clarify our association to place. The dialogue that is established with a variety of agencies exposes the complexities and failures of spatial planning and propels community’s involvement in future decision-making. Power has exhibited widely and is represented by the Phatory Gallery in New York. Exhibitions include e v+ a, Kilkenny Arts Festival, RHA, Triskel Art Centre and the National Self Portrait Collection. She has received numerous awards and residencies including the Mac Dowell Colony Residency in New Hampshire, USA.

Jacki Hehir has exhibited in the UK and Ireland and has received awards in both countries for her positive representations of the Travelling Community and for her performance as an undergraduate in the Nikon Discovery expo, London 2008. Working on an ongoing basis with nGO, The Woodland League, and in collaboration with fellow artists and community groups, Hehir employs her role as artist to highlight some of the political and socio-economical tendencies that are otherwise excluded from our general knowledge or ignored. The juxtaposition between economics and the environment is a medium for her most recent works and actions.