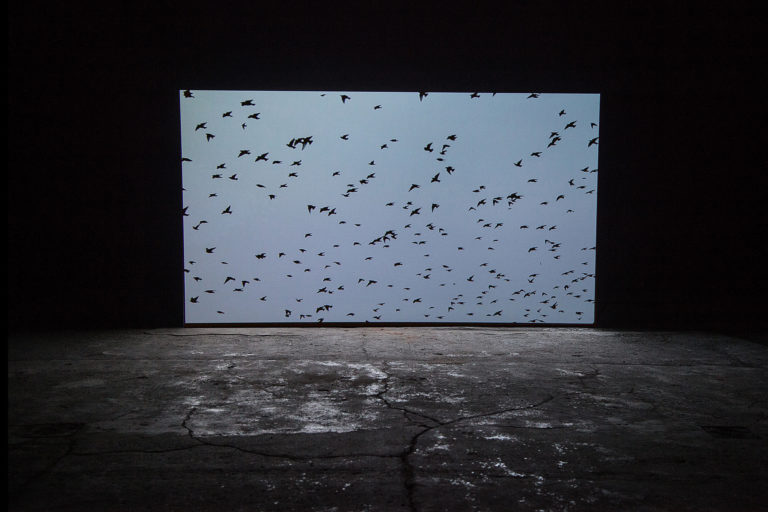 Criodhna Costello’s moving-image practice attempts to reconfigure perceptions of time. In her works she explores representations of time through the looping of images, where repetition is not a supplementary accumulation, but instead an essential operation. With minimal action, no dramatic subjects, and no climax, these moving-image works address the viewer through spectacular displays and movement rather than action or plot.

Within these works, the loop acts as an interruption to the linear forward movement; scenes are repeated and re-articulated through editing. This temporality interrupts the progression of cause and effect. The universe that these loops create is that of a perpetual present, every element in the video is both before and after every other element. While narrative is usually designed to evoke expectations of an oncoming ending, these works attempt to tune viewers into a richness of the enduring present.

In the context of Still (the) Barbarians, Murmuration (2014) offers an analogy between the colonial effects of diaspora and the behaviour of migratory Starlings. Murmuration focuses on mass dispersions and subsequent unity through ‘collective behaviour’ of individuals that attempt to overcome such situations. Collective behaviour refers to the spontaneous, unstructured, or temporary actions of a group of people in response to an event or situation in the form of a crowd or social movement.

A murmuration is a large flock of Starlings that come together in the winter months. By mid-winter the population of these birds in Ireland swells, with up to half a million roosting together in some places. These gatherings are boosted by thousands of migrant birds returning from Europe for the milder Atlantic climate. Migrant Starlings from Scandinavia, the Baltic States, Germany, Poland, and Russia join the Irish residents. Each evening, just before dusk, this huge gathering performs a unified aerial dance as they prepare to roost. Costello has captured the spectacle of the Starlings’ dance in a silent twenty-minute shot that loops continuously. As they fly, the birds appear to be connected together. They twist and turn and change direction at a moment’s notice. They swarm together in a system that depends upon the interrelationships between each individual bird – it is an example of emergent behaviour that also confuses and deters predators.

Criodhna Costello is an artist who lives and works in London. Her PhD research at Royal College of Art, London, focuses on the ‘moving-image loop’ and explores a relationship between theories of temporality and the history of the moving image.