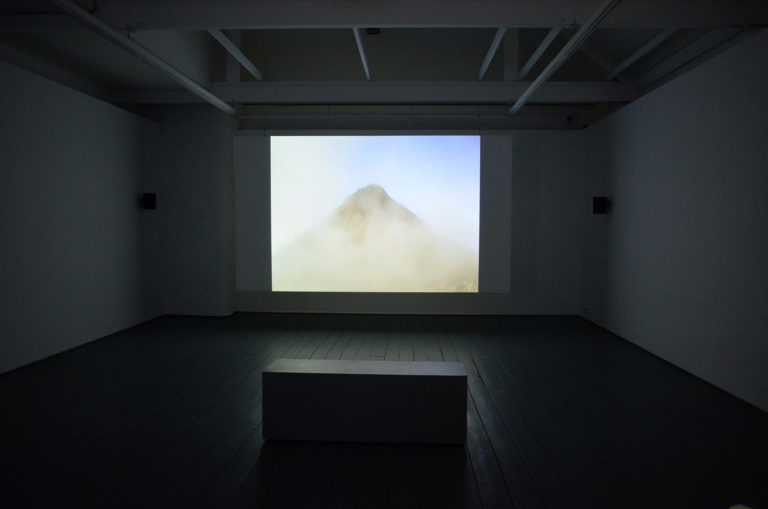 For EVA International – Ireland’s Biennial 2014, Hartmann, a French artist, presented Kessoku (covenant) a film realized in 2006 in Japan. Kessoku (covenant) connects the strategic spaces of economic globalisation to the unstable zones of volcanic craters. In a swaying and reversible motion amplified by an electronic music sample and by atmospheric vibrations of colour and smog, business fluctuations connect with telluric tremors in search for an anchorage and a balance point. A paradoxical feeling of subdued restlessness arises from this intense encounter. Supported by the French Embassy in Ireland.

The work of Cécile Hartmann negotiates relations between documentary and fiction. Her works question the division between a constructed world and an organic (natural) world, pondering instability, materialistic experience, and the metaphysical. Extensively researched information drawn from the recent history of the global economy, architecture, or pre-modern forms of life is reformulated into elaborate photographic projects and film installations. After studies at The National Fine Arts Academy of Paris, Hartmann lived in Japan and in Berlin. Her films have been realized in places as far apart as New York, Tokyo, Hiroshima, Dubai and in the Azores Archipelago. In 2013 and 2012, her movie “Achrone” was shown at the Museum of Fine Arts, Boston, Beirut Art Centre, Lebanon; Museum Akarenga Soko in Yokohama. She has also recently exhibited at the Palau de la Virreina in Barcelona, Museum of Photography of Thessaloniki, and the Museum of Modern Art, Bogotà.