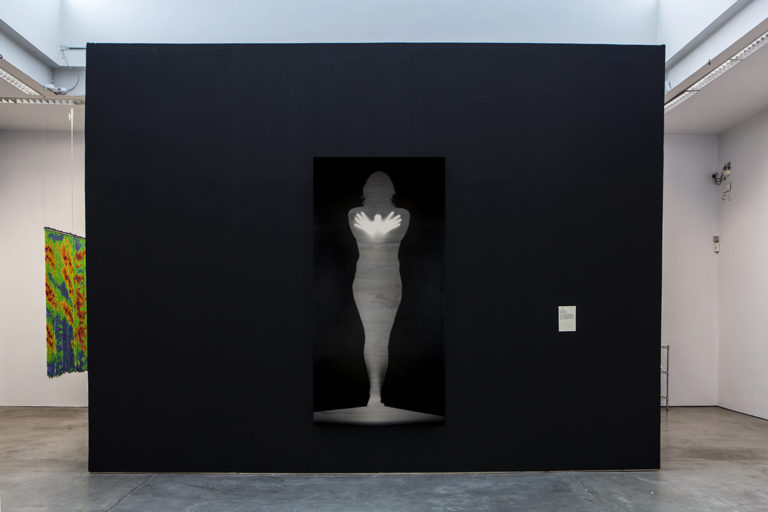 Bruce Conner was a pioneer in experimental film, collage, photography, conceptual works, and paintings. In his practice, he regularly challenged the limitations of medium, genre, and style, and questioned and subverted the value of artistic identity. In the 1970s he created a series of black-and-white life-sized photograms called ANGELS. To create these, he placed his body between a large sheet of photosensitive paper and a light source. The area on the paper that remained white after exposure is where Conner’s body is in front of or covers. If there’s no intervention, the paper darkens. In the earliest works that were exposed to light for a relatively short time, Conner’s figure appears as a stark white silhouette against a completely black ground. Eventually, he began exposing the paper to light for longer periods of time. In Sound of Two Hand Angel (1974), for example, his form is a grey silhouette, but where he touched the paper it is pure white. In these photograms, the human figure is presented as an angel or Christ-like figure. What is significant in the work is a sense of occult spiritualism that, in its earnestness, remains as much of an awkward fit today as it did in the irony-heavy post-war American art world out of which he emerged.

Bruce Conner (1933–2008, USA) was one of the foremost American artists of the post-war era, and his work touches on various issues from that period, including a rising consumer culture and the dread of nuclear apocalypse. Conner exhibited widely throughout his career, and in 2016 the Museum of Modern Art in New York staged a major retrospective of his career titled BRUCE CONNER: IT’S ALL TRUE.