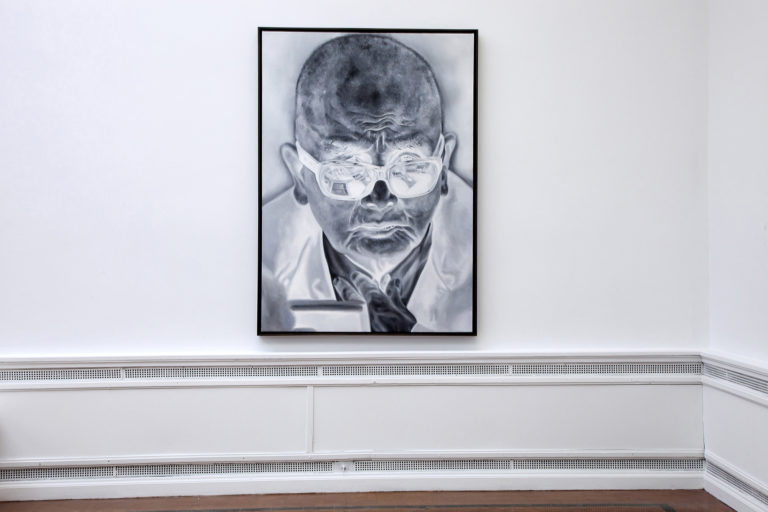 Bradley McCallum’s work focuses on bringing together fine art and social practice. He describes his work as ‘an investigation into individual and collective social memory, responsibility, and actions’. His multifaceted projects, which include public actions, installations, videos, paintings, and sculpture, reflect upon media representations and social concerns, and are often inspired by American history and the legacies of race in contemporary American culture. The artist has worked collaboratively with Jacqueline Tarry since 1998. McCallum and Tarry have exhibited globally, and through their work they discuss issues revolving around marginalized members of society. Embedded within their work, whether it is of an historical, personal, or civic-based nature, is their ability to address complicated issues concerning race and power.

As an artist who wants to make us both think and question, to make us look – especially when we would rather look away – McCallum’s portraits demand we pay attention to what might lie beneath the surface. For each portrait he creates one hyper-realistic colour painting and one monochrome painting using grisaille technique. His large-scale portraits of powerful men, such as Thomas Lubanga Dyilo (founder of a rebel group in the Democratic Republic of Congo), Nuon Chea (chief ideologist of the Khmer Rouge), and Slobodan Milošević (president of Serbia 1989 to 1997), do not make explicit the violence (rape, murder, ethnic massacre, torture, and slavery) that these men in power often condoned. Instead the portraits have a complex and unsettling effect: the viewer is faced with the presence of the individual being portrayed. Moreover, these paintings testify on behalf of affected communities and challenge the audience to examine truths about the violence, alienation, and inhumanity that underlie many aspects of everyday life

For EVA International 2016, McCallum presented several ‘reversal’ portraits from the series Weights and Measures, which he created over the past two years. The work explores masculine configurations of power in war, international relations, and militarism. The series comprises oil paintings based on photographic negatives of defendants taken as they appeared before international courts and tribunals. In 2014 McCallum established a unique, one-year research-based residency at the Coalition for the International Criminal Court to develop the project. The residency gave him access to critical intelligence and historical perspectives, and introduced him to key people in the field. The international tour of Weights and Measures, which begins in April 2016 in The Netherlands and Ireland, will then continue to Kenya, Uganda, the Democratic Republic of the Congo, and South Africa – bringing the work directly to communities impacted by some of the defendants represented in this collective portrait of corrupted power.

Bradley McCallum received his BFA at Virginia Commonwealth University in 1989, and an MFA from Yale University in 1992. In 1997 he moved to Brooklyn, New York, where he continues to live and work. Most recently, McCallum was the artist-in-residence at the Coalition for the International Criminal Court, New York City from March 2014 to March 2015. Work by Bradley McCallum and McCallum & Tarry are represented in many private and public collections worldwide.