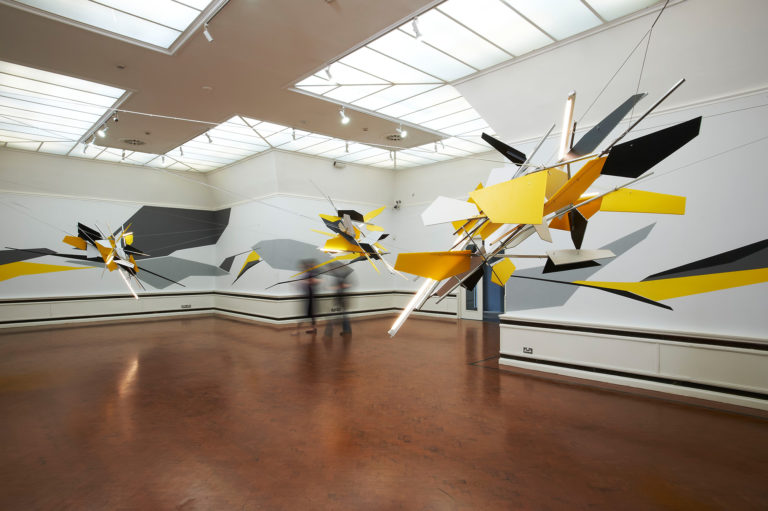 Anibal Catalan’s work is based on the fusion of two-dimensional and three-dimensional mediums, from traditional painting to site-specific installations. Catalan uses architecture as a language that permits the dialogue of different forms of representation. The principle of his sculptural installations refers to avant-garde aesthetics, such as Russian constructivism as a model process. The use of pictorial and sculptural elements establishes a resistance and an interactive dialogue with architecture, creating a composite structure that works in a relationship between tension and suspense, where time and contemplation provoke a state of uncertainty. Through the use of improvised constructive forms displayed in real space, Catalan develops a form of experimental and domestic architecture.

Morphological Zone was a site-specific installation where three abstract de-constructivist elements were designed using the gallery space as a form of canvas. The walls of the exhibition space were painted in the same style. The main intention of the piece is to use formal and improvised compositions, mixing different media such as painting and sculpture while provoking different states of contemplation; the overall image can be exploding or imploding energies, there is not a specific reference of time. The use of industrial and domestic materials point to ideas of modern and mass production, as well as to some kind of cheap or precarious and ephemeral elements that evoke contemporary architecture and design. The fluorescent lights within the structures refer directly to the idea of space and time as a form of vector without any specific direction.

Anibal Catalan is based in Mexico City, graduated from enPeG La esmeralda in 2006 and attended the School of Architecture at Anahuac university from 1993 –1997. Catalan is a recipient of the national Fellowship FOnCA Sistema nacional de Creadores 2011–2013.