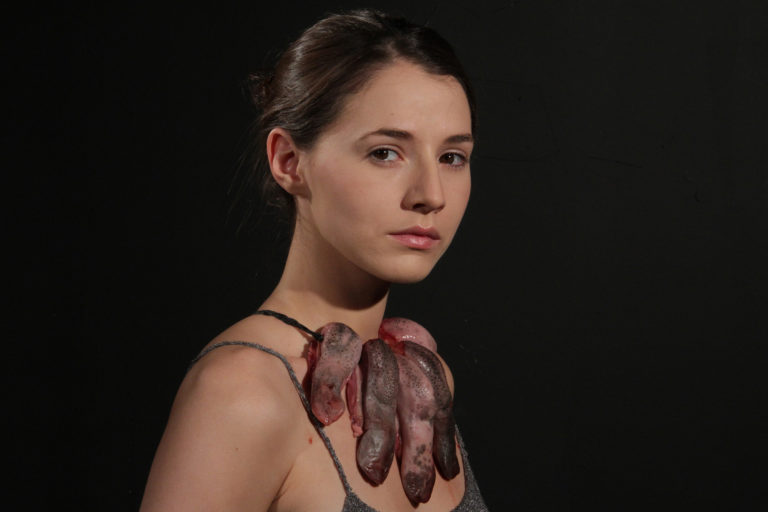 Alice Maher’s work touches on a wide range of subjects often reprising, challenging, and expanding on both mythic and vernacular narratives. Her practice spans painting, sculpture, photography, drawing, animation, and video. These various artworks and materials lend themselves to lateral, associative, or enigmatic display, aided by her very particular attention to setting and context. There is often a playful collapse between high and low culture, as well as an acute sense of carnality and drama. One-off objects and organic pieces are revealed to have some unknown ritualistic use.  Animated films expand on a lifelong devotion to the practice of drawing. Maher places histories and symbologies of the female at the very centre of her work to, in a sense, reclaim them.

In historical accounts, barbarians are generally located outside the borders of civilization, and in narratives of psychoanalysis, the feminine is often located in this outside-ness. Cassandra, a figure in Greek mythology, was a double outsider in that she was both a female and a barbarian. Her native city of Troy occupied the limits of Empire, as far as the Spartans were concerned, and had to be subjugated. At once loved and betrayed by the gods, Cassandra had the power to foresee the future, but was cursed since her prophecies were forever disbelieved.

In Maher’s two-screen film Cassandra’s Necklace (2) (2016), the viewer experiences this border space – a non-place and non-time – through which the young seer wanders. It is not known whether Cassandra is outside or inside, as she tests and tastes, measures and maps the limits of her world. Maher’s film reprises the figure of Cassandra to call forward the ‘despised’ of myth and history. Cassandra moves, she walks, she eats, but she never speaks. Her only company and adornment: a necklace of bloody tongues. In this version of the film, Cassandra’s voice is heard through the text of Anne Enright – a fragment of unpublished script, written in 1985. The words are spoken and sung by Jennifer Walshe in the multilayered soundscape composed by Trevor Knight. Maher considers the ‘voicing’ of Cassandra as particularly relevant in reflection of the unspoken history of women and their role within the founding and direction of Ireland’s Republic.

Alice Maher is an artist who lives and works in Mayo, Ireland. Her multifaceted work comprises painting, drawing, sculpture, installation, photography, and film. She is represented by the David Nolan Gallery, New York (since 2001), and the Purdy Hicks Gallery London (since 2003). Her first major solo show, familiar was presented at the Douglas Hyde Gallery, Dublin, in 1994. That same year she represented Ireland at the São Paulo Biennale.