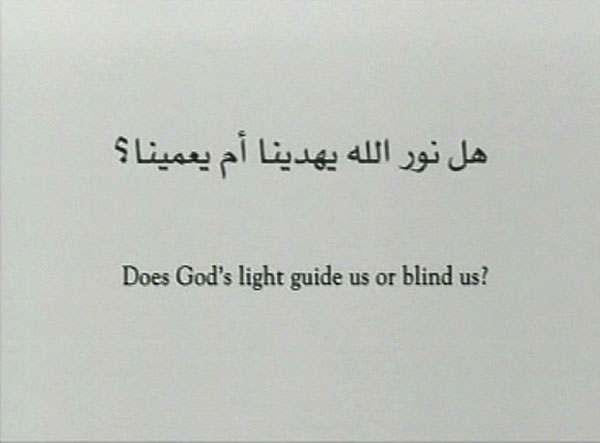 An idea by French producer Alain Brigand, 11’09”01 September 11 is a collective film made up of eleven short films by different directors, including Claude Lelouch, Youssef Chahine, Ken Loach, Alejandro González Iñárritu, Amos Gitaï, and Sean Penn, which offer various perspectives on the terrorist attacks in New York and Washington, DC, in September 2001. Each film had to be no longer than eleven minutes, nine seconds, and one frame. González Iñárritu’s film is the only one without a clear narrative structure and in it he experiments with the traditional dichotomy between sound and image by separating the two elements. The screen is entirely black for most of the short film, interrupted sporadically by footage of men and women jumping from the Twin Towers, and so the mise-en-scène is dependent on a soundtrack that mainly consists of sounds recorded from around the globe on that day: snatches of newscasts, people’s voices, mobile-phone recordings, the sound of floors collapsing. The viewer is forced to adopt a new kind of perception by being confronted with darkness and sounds that can’t be ignored. By separating sound and visual, González Iñárritu enhances both. The viewer is left to confront their own images, fears, and feelings about what happened, and the experience of watching is like a means of catharsis.

Alejandro González Iñárritu (b. 1963, Mexico City) is a film director, producer, and screenwriter known for his award-winning films Babel (2007), Birdman or (The Unexpected Virtue of Ignorance) (2014) and The Revenant (2015). Iñárritu won the Academy Award for Best Director, Best Original Screenplay, and Best Picture for Birdman in 2015. The following year he won the Academy Award for Best Director for The Revenant. In 2017 he realised Carne y Arena (Virtually Present, Physically Invisible), a VR installation presented at Fondazione Prada, Milan, LACMA, Los Angeles, and Centro Cultural Universitario Tlatelolco, Mexico City (2018). For this work, the Academy of Motion Picture Arts and Sciences presented Gonzalez Iñarritu a Special Award.