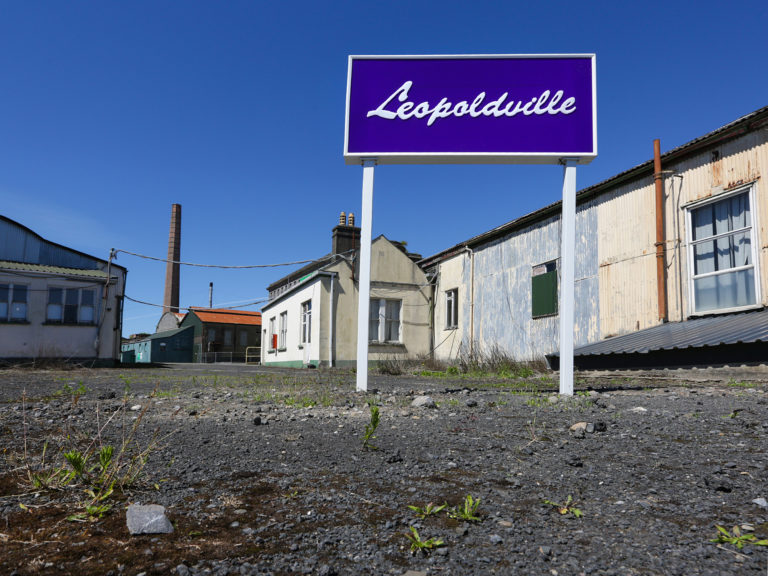 Alan Phelan’s practice involves the production of objects, participatory projects, curating, and writing. All of these elements inform and contribute to an interest in the narrative potential of an artwork. Narrative is explored through historical events, ideas, things, and places as well as through their fictional counterparts. The resulting artworks may appear to be fixed, to form a visual coherence, yet there is also a complexity to the work that captures a different sense of the subject addressed. Phelan considers process as central to the artwork, which he describes as provisional, unfinished, or unmade. There is an openness surrounding the final object or project that allows wider and often humorous connections to surface across narratives, objects, and situations.

With Casement and Leopoldville (2016), Phelan mixes literal and symbolic references, presenting conflicting viewpoints and interpretations in an attempt to undermine the certainty of cultural assumptions in a subtle way. The relationships generated are multifaceted, with individual works and installations forming a visual coherence yet projecting a complexity that captures a different sense of the subject addressed. These combinations also question notions of authorship and practice.

Casement and Leopoldville considers the complex history surrounding the contradictions of (post)colonial humanitarian work through the history of Roger Casement – a mysterious and interesting character in Irish history, a man of many facets and ideals – who was executed in 1916. Growing up between England and Ireland, he eventually joined the British Colonial Service in Africa and became a champion of human rights, knighted for his good work. On the other hand, he was also an Irish nationalist who was instrumental in the organization of the Irish Volunteers and a noted fundraiser for their cause.

The work – an installation of several elements both inside and outside the gallery – focuses on the word ‘Léopoldville’, the former Belgian colonial name for Kinshasa. Rendered graphically to mimic Cadbury’s chocolate corporate logo, Léopoldville appears as an outdoor illuminated sign, made by shop sign fabricators. This piece conflates the benevolent financing of humanitarian work – William Cadbury’s funding of Casement’s investigations into the atrocities in the former Congo – with the collision of private and corporate interests that often counter such work. Casement revealed that tens of millions died under King Leopold II, who treated the Congo as his private fiefdom to be exploited for personal gain. The piece offers a counter-factual critique of big business and humanitarian crisis, misaligning good and bad to highlight the complicit nature between nation-states and multinational corporations.

Correspondingly, a short video projected within one of the milk factory warehouses brings these various elements together within a series of questions posed to the CEO of a noted NGO. The conversation aims to tease out the humanitarian legacy of Roger Casement compared with contemporary international human-rights activism.