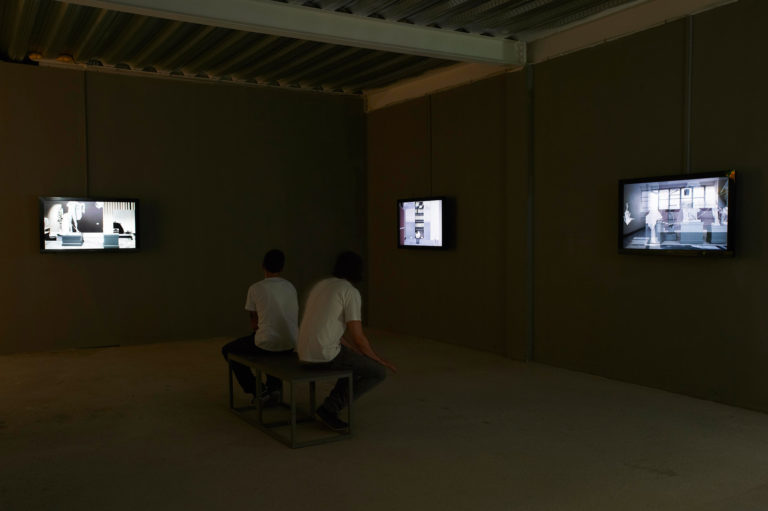 Ailbhe Ní Bhriain’s practice explores situations of aftermath and uses composite imagery to create scenes in which the dimensions of time and place are out-of-joint. It seeks to represent a state of things come undone by imagining the hallucinatory in the mundane and vice versa.

The series Great Good Places operates on two levels. On the one hand it employs deliberately simple collage techniques to declare its constructedness and point to the illusory nature of image-place; on the other hand it asks the viewer to inhabit a fluid illogic – an unfolding of form and narrative that lends an unlikely coherence to the contradictions of the imagery.

Conjuring a world of facsimile, made of plaster cast statues, models and settings which are revealed to be a series of props, the work speaks of the nature of representation and its inherent falseness. It inflicts a kind of entropy on the conventions of that representation, reducing classical form, perspectival space and the depiction of landscape to a series of aspirational gestures. Within this, however, ideas of poiesis are explored – the ‘coming to presence’ whereby an image bridges the gap between nothing and something, or between surface and depth, allowing a world to take shape in our imagination. Unlikely and ambiguous forms emerge from the dismembered visual spaces, and work to weave the scenes together. Constructed from polythene plastic, literally emerging from debris, these forms might be seen as an attempt to reconstruct a fragile belief in the aftermath of pictorial and philosophical certainty.