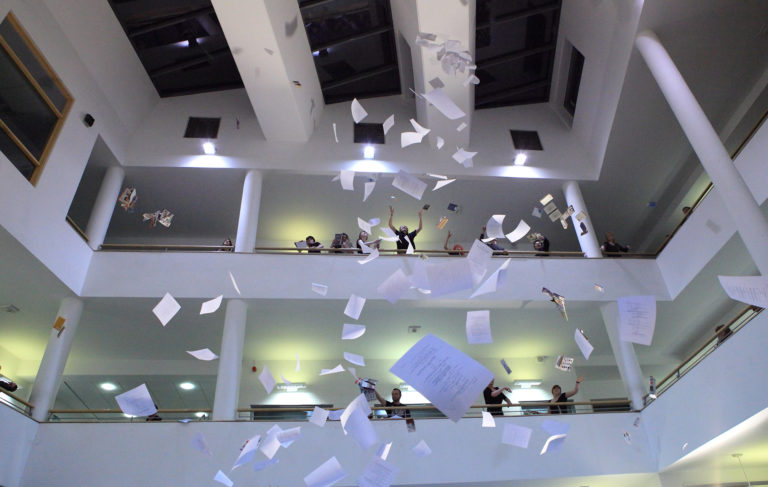 A persistent theme in O’Connell’s installation is a response to the ever-shifting political landscape of local and international events. The work focuses on process, finding a visual language to map the values underpinning the search for resolution.

Library, O’Connell’s video-installation filmed in the atrium of a library, examines the trend away from traditional reading and the possible diminution of the written word due to our growing dependence on technology. The growth of Web surfing combined with the escalating use of acronyms accepted globally by millions through today’s social networks i.e. Twitter, Facebook, YouTube and texting, to name but a few, could possibly lead to a significant decline in text literacy, causing a shift towards more visually based media in the coming decades.

50 volunteers took part in the making of the work, where, during a violent act, the contents of the library are aggressively thrown into the atrium of the building creating a visual avalanche. In unison, the volunteers repeatedly shout the title of the books being thrown; this juxtaposed with the sound of the books crashing to the floor creates an unsettling confusion that resonates throughout the building.

Adrian O’Connell (b. 1965, northern Ireland) is a visual artist based in Belfast. O’Connell graduated from university of ulster, Belfast with a Master of Fine Arts in 2000 following a BA in Fine & Applied Art in 1998.