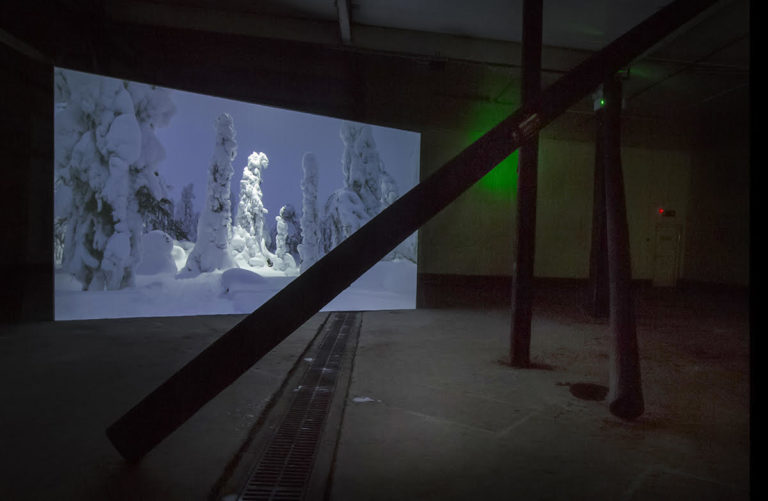 The Soil Became Scandinavian (2018) is a work involving fi lm and sculptural installation. The sculptural installation takes the skinned and creosoted electricity pole as its basic unit. The film work traces the steps of an Irish forester sent to rural Finland in 1946 to find trees in sufficient size and number to be used as electricity poles in Ireland. The necessity for poles was the result of the surge in demand for electricity across the country following the building of the Ardnacrusha Power Station, the hydroelectric power plant in County Clare. The electrification scheme had a huge impact on the social, economic, and industrial development of the country, and transformed both urban and rural life.

Adrian Duncan is an artist and writer based in Ireland and Berlin. His visual artwork is primarily installation-based, most often using photography, video, and sculpture. Duncan’s most recent project was the Bungalow Bliss Bus Tour (2017), made in collaboration with the Red Bird Youth Collective and Galway Arts Centre. During 2018, he and Feargal Ward will collaborate on a film on the subject of Irish engineer Peter Rice. Duncan’s writing has been published by frieze, the Times Literary Supplement (UK), Art & the Public Sphere (UK), the Dublin Review, Architecture Ireland, gorse, and the Irish Times, among others. He is co-editor of Paper Visual Art Journal (IRL/DE).

Feargal Ward is a filmmaker and artist based in Ireland and Berlin. His practice involves collaborations with other artists and filmmakers. His most recent feature-length film, The Lonely Battle of Thomas Reid, premiered in the main competition at IDFA Amsterdam in 2017. Ward’s previous feature, Yximalloo (co-directed with Tadhg O’Sullivan), premiered at FID Marseille where it won the Prix Premier in 2014. From 2007 to 2014, he was co-director, with Miranda Driscoll, of The Joinery art space in Dublin.