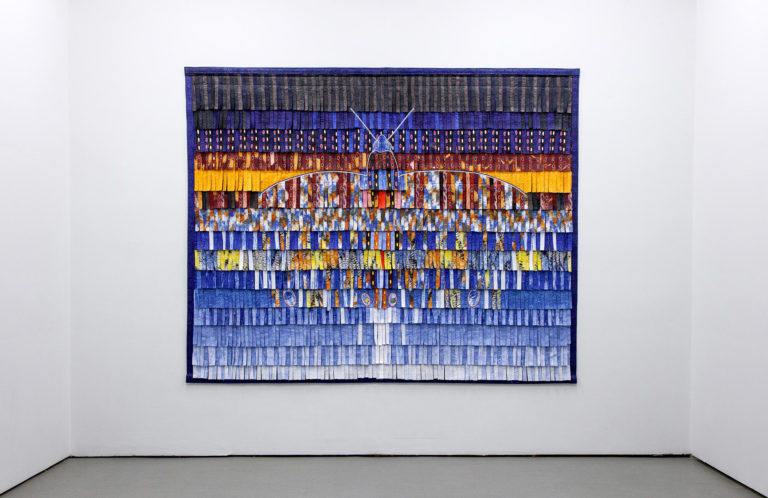 Konaté’s work primarily takes the form of textile-based installations that explore sociopolitical and environmental issues, while also showcasing his aesthetic concerns and formal language. The artist questions the way in which societies and individuals, both in Mali and beyond, have been affected by factors such as war, the struggle for power, religion, globalization, ecological shifts, and the AIDS epidemic. Employing material native to Mali – namely, woven and dyed cloths that are sewn together – Konaté creates large-scale abstract and figurative compositions. He draws on the West African tradition of using textiles as a mode of communication and commemoration. His referral to a localized cultural technique is then astutely realigned to correspond with a wider geopolitical framework, the material acting as an intercessor between local and global structures. For instance, his work, Lutte contre le HIV (1995), contemplates the devastating effects of AIDS. Konaté has returned to this subject on various occasions, notably, in the monumental six thousand square metre patchwork piece, which covered the grounds of the Bamako football stadium at the opening of the African Cup of Nations in 2002.

In more recent works, Konaté’s focus has shifted from figurative depictions to a looser abstract form. With Gris-Gris Blancs (2013), Konaté referred to the traditional West-African hunter tunic, with amulets sewn to its surface, typically recognized for its protective and fertility-boosting symbolic properties. Konaté has reformats the traditional tunic into a stunning minimalist wall piece. In the works Croix de lumière and Croix de sang (both 2010), countless strips of grey–coloured cotton, which produce an overall monotone, are interspersed with flashes of red and white, marking the symbol of a cross. Konaté is interested in examining the role that religion has often enacted, and its imposition of hierarchical power structures by its theistic tenets. The three traditional Komo colours (white, red, and black), refer to the cosmological order of the universe as perceived in Mali: red signifies blood and fire; white represents light, truth and air; and black signifies the mysteriousness surrounding the origins of life, earth, and water. Homogenous western narratives are reformulated, as cultural singularity and global systems sit shoulder to shoulder.

The two compositions were presented at EVA International 2016 that took the form of one of Konaté’s iconic textile works. These sumptuous pieces from the ‘butterflies series’ were animated by his technical virtuosity and love of colour. The theme of this particular series recalls the recent anniversaries of the independence of most of the countries on the African continent, and how fragile these states still are post-independence. The image of the butterfly ties in with this fragility. The butterfly also represents the power of transformation and metamorphosis. Its metaphorical value is Konaté’s answer to the curatorial commitment of this biennial edition to explore, face to face, the complexity of the postcolonial condition of Ireland.