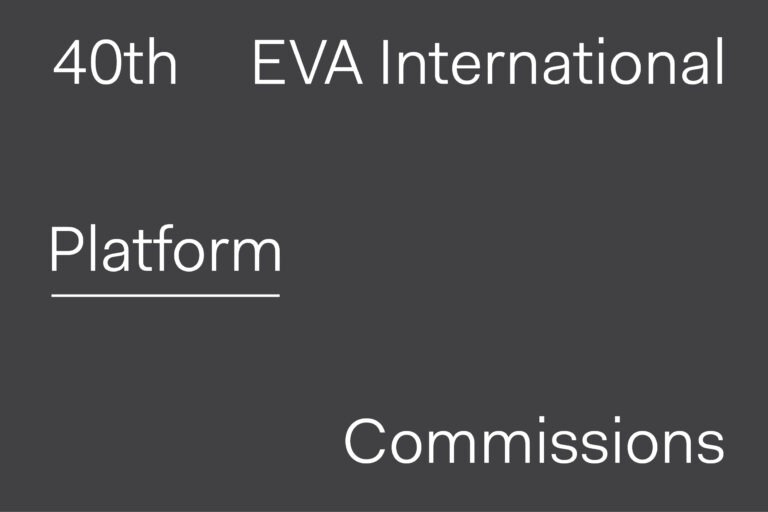 Platform Commissions is an initiative to support the production of significant new works by individual artists and collectives based in Ireland. It invites the submission of proposals from eligible artists for new artworks and projects through a simple, open, and supported process.

We now welcome Platform Commission proposals for the 40th EVA International programme, which will be selected by Emily Jacir and Pádraic E. Moore. Selected proposals will be offered support for the realisation and presentation of new work as part of the upcoming biennial programme (2022 – 2023), taking place across sites and spaces in Limerick. Although EVA’s programme typically culminates in a large-scale temporary exhibition (scheduled Autumn 2023) we are actively encouraging proposals that go beyond the usual parameters of exhibition presentation, such as one-off performance, broadcasts, publications, research-orientated projects etc.

Please click on the links below for further information:

Biographies of the Selection Panel

Pádraic E. Moore is a writer, curator and art historian. He is a graduate of CuratorLab, the curatorial programme at Konstfack University, Stockholm and a former participant of the Jan van Eyck Academy, Maastricht. Moore is curatorial programme mentor at De Appel, Amsterdam. He was guest curator at Garage Rotterdam from 2019 to 2021 and led several new commissions in this role. Recent curatorial projects include Tour Donas by Lucy McKenzie at Temple Bar Gallery Dublin and The Museum of Ancient History, a group exhibition at University College Dublin. He has organised curatorial projects in institutions including W139 Amsterdam, 1646 Den Haag, Irish Museum of Modern Art; Moderna Museet, Stockholm, Fondazione Sandretto Re Rebaudengo, Turin and Dublin City Gallery The Hugh Lane.

Emily Jacir is an artist who has been the receipent of several awards, including a Golden Lion at the 52nd Venice Biennale (2007); a Prince Claus Award from the Prince Claus Fund in The Hague (2007); the Hugo Boss Prize at the Guggenheim Museum (2008); the Alpert Award (2011) from the Herb Alpert Foundation; and the Andrew W. Mellon Foundation Rome Prize Fellow at the American Academy in Rome (2015) among others. She has been actively involved in education in Palestine since 2000 and deeply invested in creating alternative spaces of knowledge production internationally. In conjunction with her survey show Europa at IMMA (Irish Museum of Modern Art), Dublin in 2016–17 she organized a 2 week workshop (To Be Determined (for Jean)) for her students in Ramallah alongside Irish participants. She was the curator the Young Artist of the Year Award 2018 at the A. M. Qattan Foundation in Ramallah and is co-founder and the Founding Director of Dar Yusuf Nasri Jacir for Art and Research in Bethlehem, Palestine.